The month of April marks the 2nd Annual Student xType Culture Show at the school's Hunter Art Gallery. This show features the work of 48 students and their experiments creating alphabets which are fantastical, found, illustrated, photographed, videoed, animated, 3D, baked, stamped, stenciled, sketched on pavement, burned in grass, and imagined. The rules of play were to construct an experimental display font of 26 letters out of any media (with the exception of flammable, toxic or xRated, but this edict was even ignored), and they were bound only by time, money, materials and their imagination. After enduring a previous quarter of intensive book design where micro-typography conventions were the order – this was a big paradigm shift. I confronted them with new objectives; be playful, be expressive and examine what it means to create a font without any fundamental notions of legibility, readability, function or aesthetics. By challenging them to avoid these traditional typographic principles – where the function of type and reading are impaired – it made for some very surprising and creative results. It allowed the students to view the alphabet (whether real or imagined) in an entirely new context and challenged some of their own preconceptions. They were compelled to often carefully examine each letterform and in some cases deconstruct them into vaguely pixelated shapes. These playful typographic experimentations take flight in all directions and their results continue to impress and amaze me. I am happy to provide a sneak preview of some of their alphabets here. The show opens on Thursday, April 8th at the Hunter Art Gallery in the school's atrium from 5 to 8pm. The gallery is open M-F, 9:30am–3:30pm and also T and W evenings from 5-7pm. 1701 Broadway on Capitol Hill in Seattle.

Sand Serif, the elaborate video above, created with sand on top of a light table in a darkened room, is the work of two multi-cultural and multi-talented students, Mykhaylo Sinenko, originally from the Ukraine and Priyanka Basu from India. It is beautifully choreographed, and with over 7 hours of video editing alone–is a marvel to watch.

The Leitura Paper Swashes film below, is a stunningly beautiful stop action video created by Chloe Scheffe. She brings Leitura Swashes to life with cut paper, fishing line and tape. 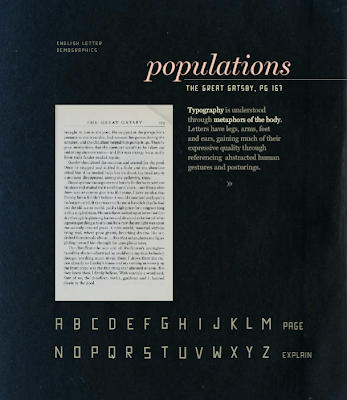 Populations, above, by Erin Kendig is an interactive demographic of the population of 26 letters on page 167 of The Great Gatsby. Erin presumes that letters are a metaphor for humans as they have feet, legs, arms and she goes on to illustrate how they each populate the randomly chosen page 167. Give it a whirl here.

The following works are Fleuras, by Donna Belnavis, a font produced with forsythia flowering branches; Enlightened Letters, by Jee Lee, a paper engineered pop-up book structure electrically lit by an LED bulb. I hope to get a video of this book up here soon; GemType, by Wyatt Carroll, a font designed with amethyst crystals in Photoshop; Boundaries, by Ross Coyne, a tunnel book structure of a stencil-cut alphabet; and Egg Fancy, by Chieu Van, a font with each letter illustrated on an egg in the tradition of Ukrainian egg dyeing, using wax resist and colorful dyes. 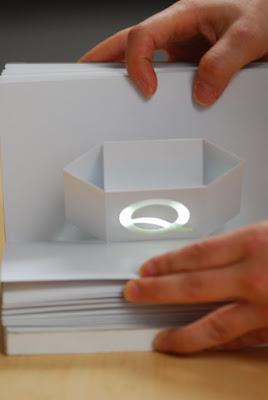 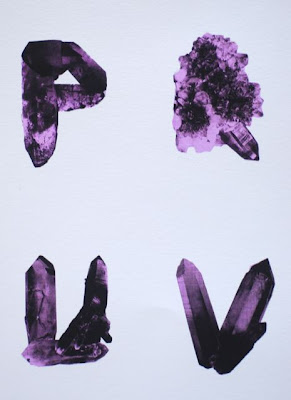 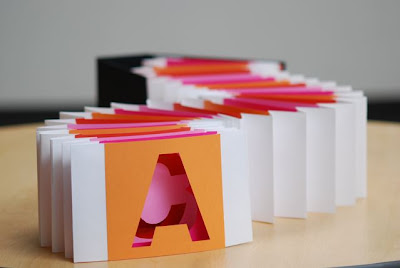 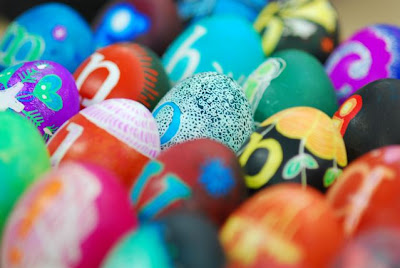