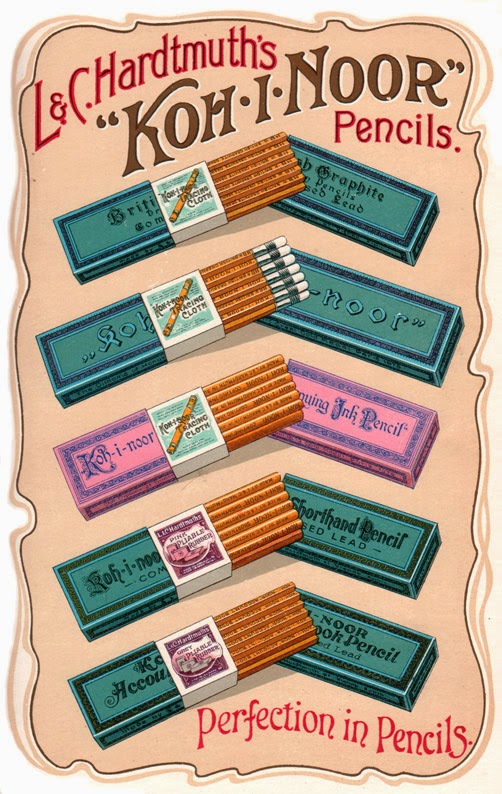 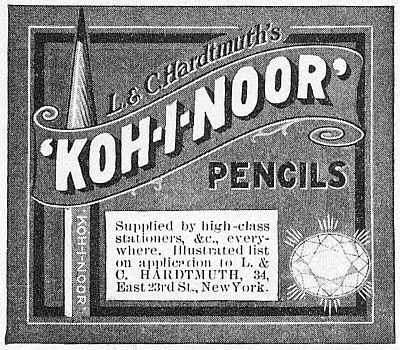 Inventor, architect and builder, Josef Hardtmuth first charted the path for Koh-i-noor pencils in 1790 when he founded an earthenware factory in Vienna. This manufacturing eventually gave way to pencil making and the factory relocated to České Budějovice, in what is now the Czech Republic. Koh-i-noor, named for the largest yellow diamond in the world at that time, truly was considered to be a diamond-in-the-rough pencil. In 1888 Franz Hardtmuth, grandson of Josef, invented the first "Koh-i-noor Hardtmuth" graphite pencil in 17 gradations, which became an overnight success. It soon became the standard in which all other pencils were made and graded. This grading of pencils allowed for a controlled consistency of hardness or softness in the lead which is still in use today. Though no universal standard of pencil grades has ever been officially adopted, most pencils are generally designated with an H, B or F numeric system. It is generally believed that H stood for "hard" leads and B for "black", softer leads, however Koh-i-noor company lore claims that H stood for "Hardtmuth", B for "Budějovice" and F for "Franz Hardtmuth". 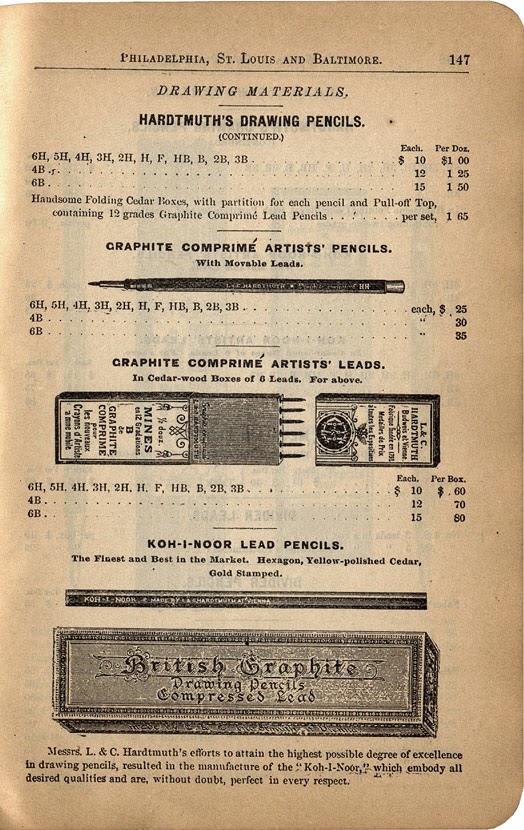 According to Dennis Smith of the Leadholder Drafting Pencil Museum, Koh-i-noor was also the first quality pencil to be painted with an opaque yellow finish, a practice later repeated by other top pencil manufacturers. This page from an 1890 art supply catalog from the Leadholder site features the L&C Hardtmuth leads and Koh-i-noor British Graphite Drawing Pencils. Below is a box of these same yellow drawing pencils (featured here previously) which received a prestigious gold medal at a world exhibition in Paris in 1878. It's worth remembering what a remarkable tool the drawing pencil was for artists at this time. Because of the compressed graphite leads, they could hold a sharp point allowing for greater detail, they lasted longer than a graphite stylus and were much cleaner to handle. 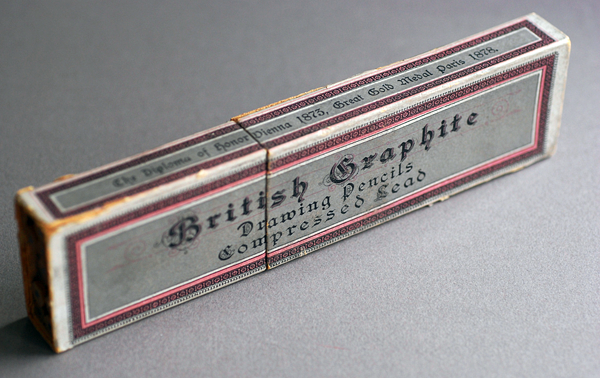 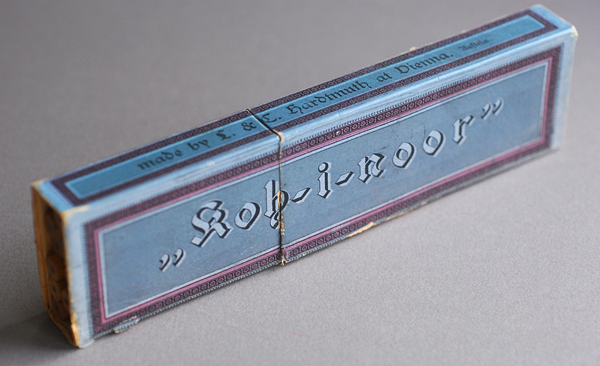 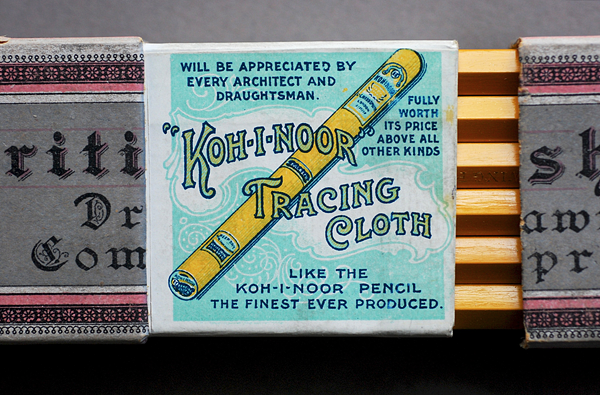 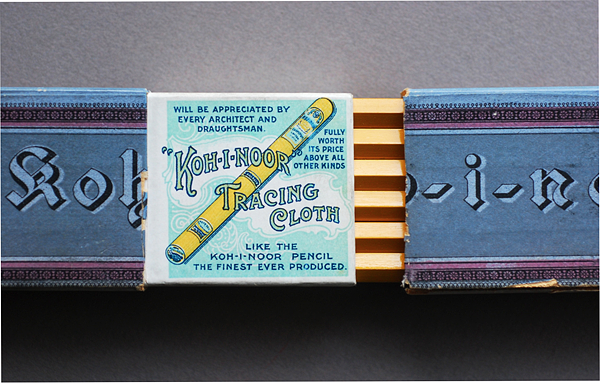 This Koh-i-noor pencil box is the oldest in my collection, and opens to reveal an inner sleeve advertising a tracing cloth. The front of the box is discolored from the sun, but is otherwise in relatively good shape considering its age. Pencil boxes of all sorts hold a fascination for me not only because of their packaging design, but because I love pencils as tools. Just like various pen nibs, pencils vary greatly from different grade qualities to manufacturers. 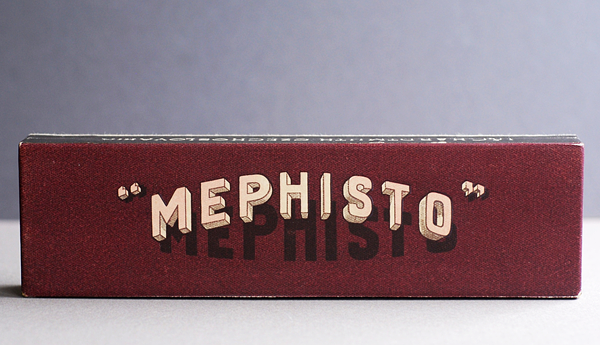 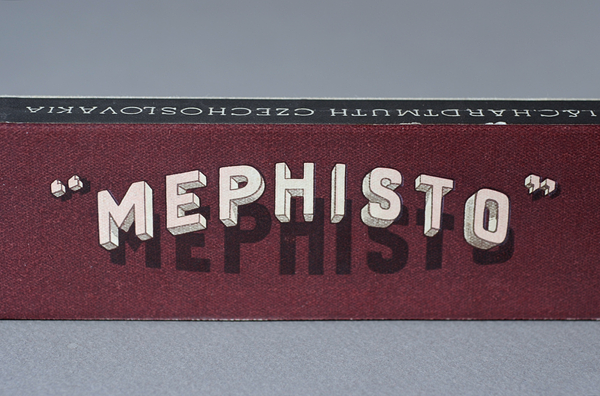 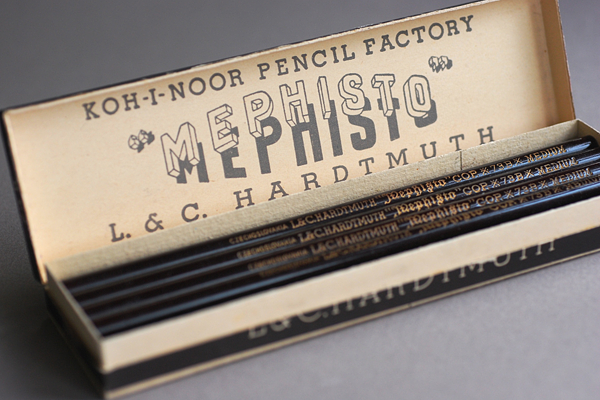 I'm uncertain exactly when the Mephisto Copying pencil was first introduced by Koh-i-noor, but it was most likely released for the British and American markets in the latter part of the 19th century. This Mephisto box with No.73B medium pencils happens to be from Czechoslovakia so it would be dated sometime after 1918 when they received statehood. Nevermind the pencils for a moment, as the packaging design and printing of this box are stunning. First the shaded 3D block letters of "Mephisto" fade from a subtle pink at either end to white in the middle. The shadow provides a mystery and depth against the solid background, and the slab-serif lettering hints at their no-nonsense sophistication. Regrettably, I have no idea who might have originally designed this box, but it came in many other colors including the yellow box below and an alternative pink Mephisto pencil with the beautiful calligraphic lettering. At closer glance, all three boxes appear to be entirely hand-lettered—a practice not uncommon in Czechoslovakia at the turn of the 20th century—partly as lettering skills were considered a source of great pride with designers and there were relatively few Roman fonts available to Czechoslovak printers at the time. 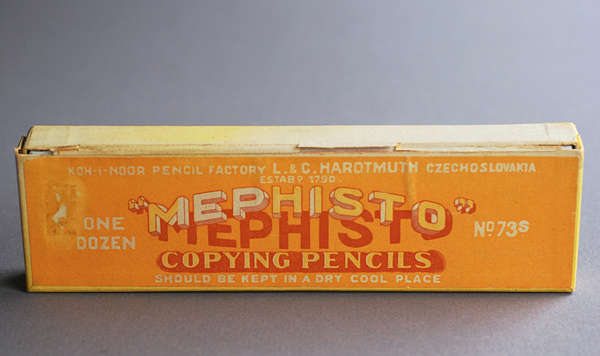 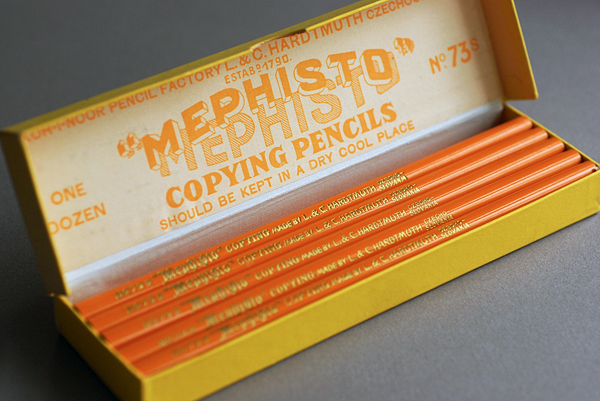 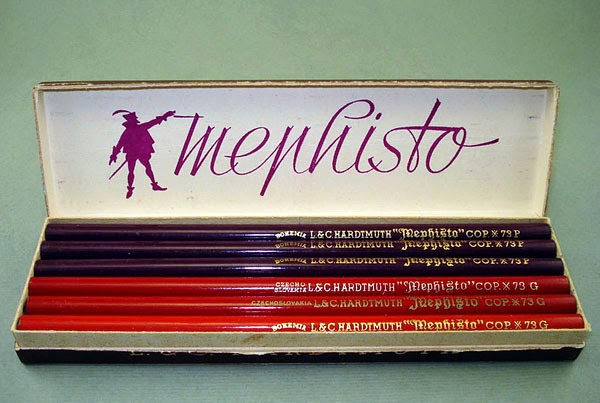 
Copying pencils such as these are a different breed from graphite drawing pencils. They were first introduced in 1870 and primarily designed for duplicating documents. The generic term "copying pencil" referred to any pencil which had a pigment, or aniline dye added to produce a more indelible marking than ordinary graphite pencils. The dye in the pencil lead was water soluble and would therefore transfer an impression onto another sheet of dampened paper. With the introduction of copying pencils in 1870, the sale of volumes of lettering copy books from stationers soon followed. The lettering book with pages of thin, blank tissue paper was used to copy outgoing correspondence and business documents as reverse ghost impressions. The hand-scribed original document would simply be sandwiched inside the lettering book onto a dampened page and placed under pressure in a copy press (often referred to as a "book press") until the print was successfully transferred. The semi-transparent paper then permitted the reversed image to be viewed from the other side. 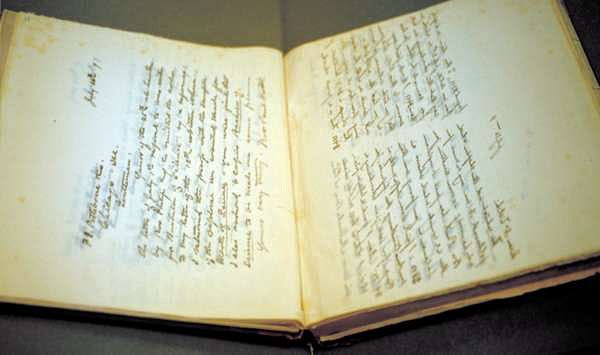 Prior to the introduction of the ball-point pen, copying pencils gained considerable favor as the tool which could not be easily erased. They were more convenient than a pen which needed to be continually dipped in an ink well, and could serve to create a permanent marking. During WWI they were widely used in the field for "completing the vast amount of paperwork associated with the war effort" according to University of Notre Dame Libraries conservator Liz Dube. 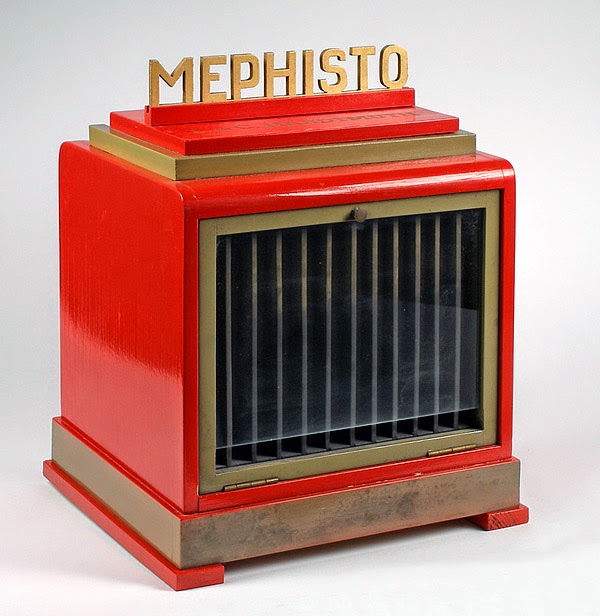 A wooden store display for the Mephisto copying pencils, designed to protect the pencils from humidity or heat—a copying pencil's undoing. 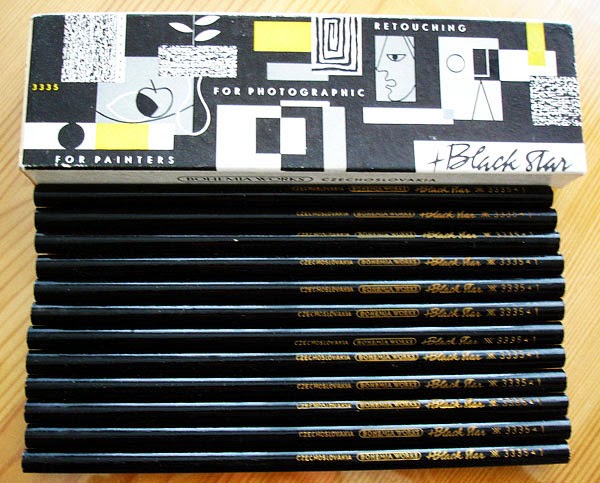 Blacksun and Black Star brand drawing pencils were both made for the Koh-i-noor export subsidiary company, Bohemia Works after 1957—further examples of stellar Czechoslovakian packaging design. The Scala copying pencils below are currently on eBay. 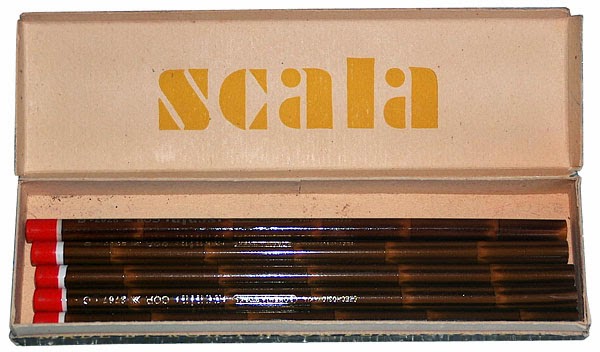 Over the years the Koh-i-noor Hardtmuth company has had divided ownership, yet has continued to produce brand named pencils from various operations in Europe, the US and Asia. In 1992 the company was again privatized with headquarters remaining in the Czech Republic. Various subsidiaries and production facilities were later established throughout Eastern Europe and China. Nearly 225 years after Josef Hardtmuth's original graphite pencil invention, the company continues to produce some of the finest drawing tools for artists.