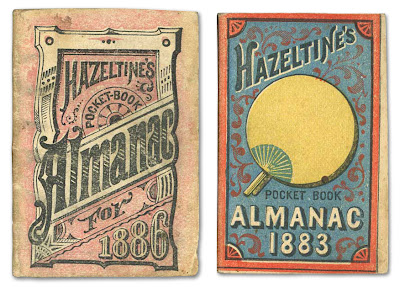 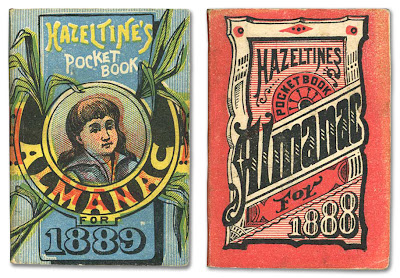 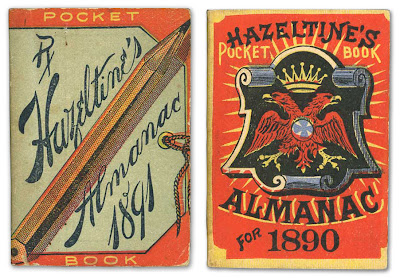 During the late 19th century, miniature almanacs with colorful cover designs were a popular form of promotional advertising by manufacturers of medicines who often gave them away at drug stores throughout the US, Canada and England. One such maker was Hazeltine medicines, of Warren, PA, who were proprietor's of Piso's (pronounced "pie-soz) brand cures for consumption (tuberculosis) and other maladies, and they issued a series of very popular almanacs measuring only 2 x 1-3/8". Hazeltine soon became famous for the Piso's brand cough medicine which contained extracts of chloroform, cannibis, morphine and other opiates and renamed itself "Piso". Today, the little Hazeltine Almanacs are not only collected because of their size and design, but they are very popular with those who collect ephemera related to illegal drugs once found commonly in medicines. Piso's was later exposed by Samuel Adam's as being a brand name cannibis medicine in his classic 1905 book on quackery, The Great American Fraud, which soon lead to the establishment of the US Food and Drug Administration.
Just another epic true tale in the annals of American marketing and public deception. As odd as this story is, the untold story I would most like to hear would be about the designers and printers of these little almanacs. Unfortunately, little respect or recognition was paid to these craftsmen of that era. 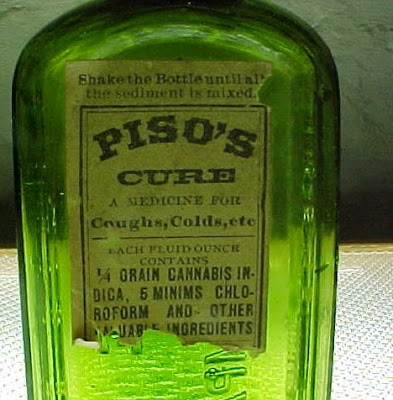