Printing at the Frost Fairs 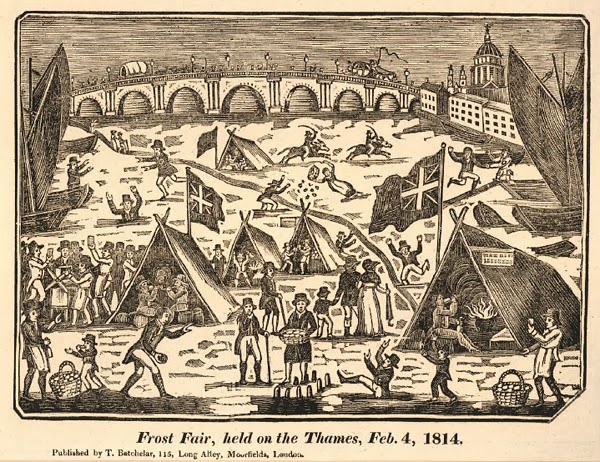 An 1814 woodcut illustrating the carnival atmosphere on the Thames, with a printer peddling keepsakes on the left, and Blackfriars Bridge and St Paul's cathedral in background. Source: British Museum 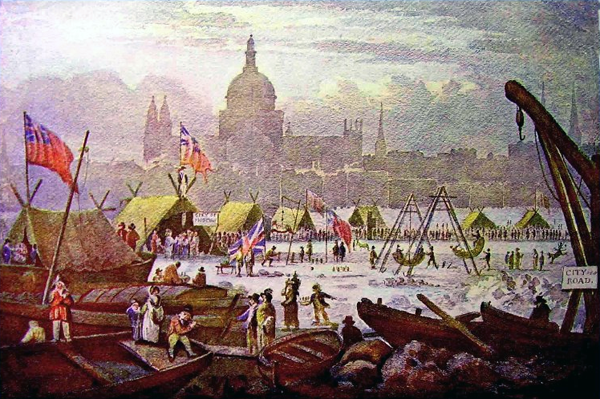 What may seem like the coldest Winter any of us can recall, it pales in comparison to those of the Little Ice Age which began in medieval times and continued to the mid-19th century. First the frost and snow would hang on for months, then canals and rivers would freeze, stalling cargo ships on cities' major arteries, bringing commerce to a virtual standstill. In London, the Thames River was much wider at this time and especially prone to freezing, causing thousands of dock workers significant hardship when they couldn't earn a day's wage to feed their families. It wasn't long however for some of these enterprising Londoners to seize an economic opportunity and turn this winter wonderland into an outdoor commercial carnival on ice, known as the Frost Fair. This past week marked the bicentennial of the largest Frost Fair, which began on January 31st in 1814 and lasted five more days. 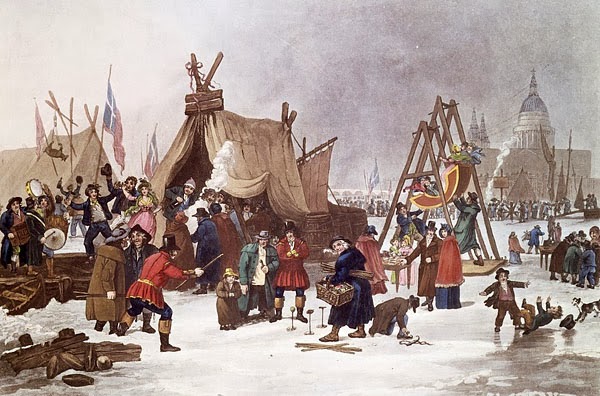 The Fair on the Thames, February 1814, Luke Clennell, Source: Museum of London via Atlas Obscura.

In London's 1814 Frost Fair, peddlers, tradesman and hawkers of every stripe flocked to the ice and set up tents for games, bookstalls, puppet shows, gambling booths, and wheels of fortune. These 19th century pop-ups profiting from this freeze were decorated with flags, streamers and signs with names like City of Moscow, reflecting the cold winter conditions. Local watermen held guard at the gates, charging tolls for entrance onto the City Road, the main artery onto the ice which was lined with ash for safe walking. They then charged visitors once again when they chose to exit. The crowds increased daily as news spread, as did the chaos and petty crime. Boisterous revelers drank gin, rum and beer, ate roasted lamb and danced to fiddle music amidst the frozen landscape. Onlookers even reported an elephant was daringly escorted onto the ice to add to the carnival atmosphere. Meanwhile, about a dozen local printers dragged their large printing presses and lead type onto the ice to print souvenir keepsakes for this once-in-a-lifetime occasion. This proved to be one of the most popular attractions at each of the Frost Fairs. Those that could manage setting their names in cold metal type could print their own personal memento of their Frost Fair visit.

A souvenir printed at the 1814 Frost Fair. Source: Where Thames Smooth Waters Glide. 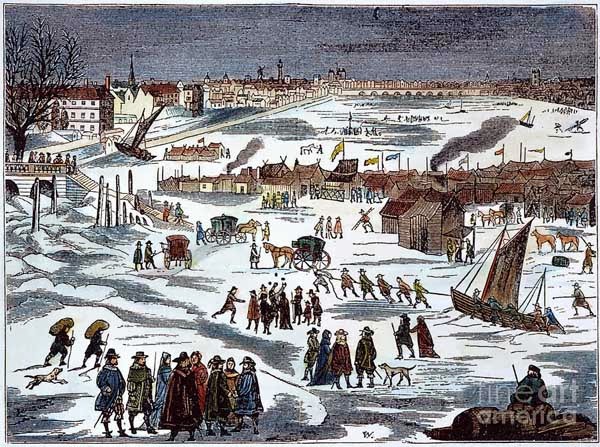 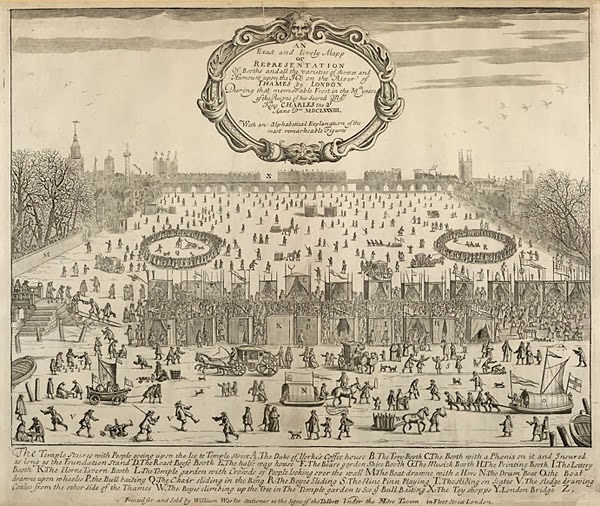 Another engraving of the 1684 Frost Fair on the Thames when King Charles II and his family visited. They stopped by a printer's stall to print their own souvenir keepsake from this Frost Fair. Source: British Library 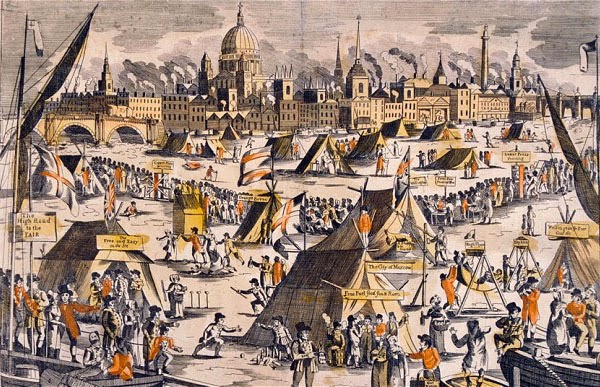 The 1814 London Frost Fair. Source: Alamy via The Telegraph 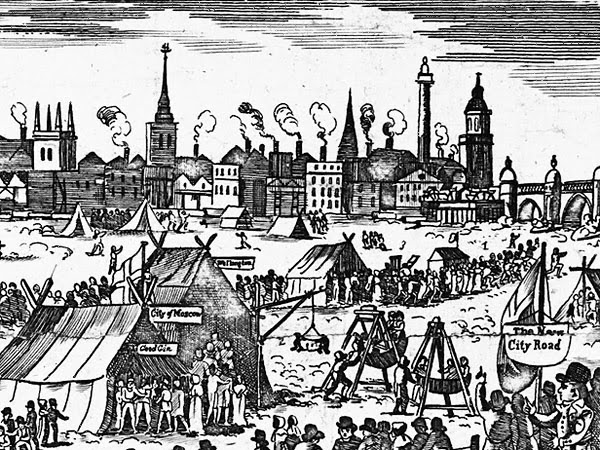 From George Thompson, A View of the River Thames, 1814, Museum of London via Atlas Obscura. Notice in center, on the right, you can make out a handpress just between the two tents and crowds of people.


Cracks in the Ice

By the 4th day of the Frost Fair, temperatures began to warm and the ice began to loudly crack beneath the raucous crowd. Huge fast-flowing chunks of ice broke loose, casting some unfortunate fairgoers adrift. Desperate vendors were reluctant to fold up their shops so quickly and forego the easy income. Many booths and a number of printing presses sailed downstream never to be seen again. In defiance, another printer set up his press on an ice island near Westminster, however this warming trend inevitably signaled the near end of London's last great Frost Fair of 1814. By 1831, the old medieval London Bridge came down and was replaced with a bridge with wider arches permitting the river to flow more freely. In the 19th century, embankments were built, creating a narrower and faster flowing river, less prone to freezing. It is highly unlikely in these times that we will ever see the Thames again freeze in our lifetimes. The biggest threat it now poses is of the river flooding its narrow banks. 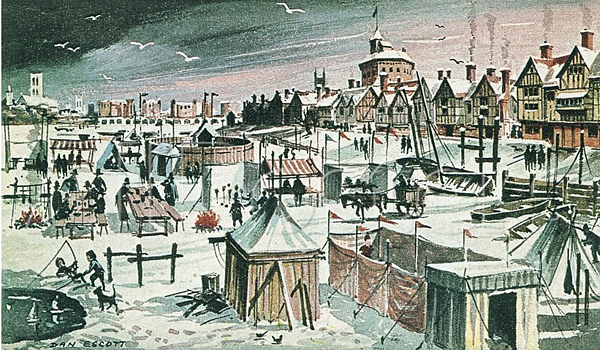 Source: Artwork by Dan Escott for All Posters 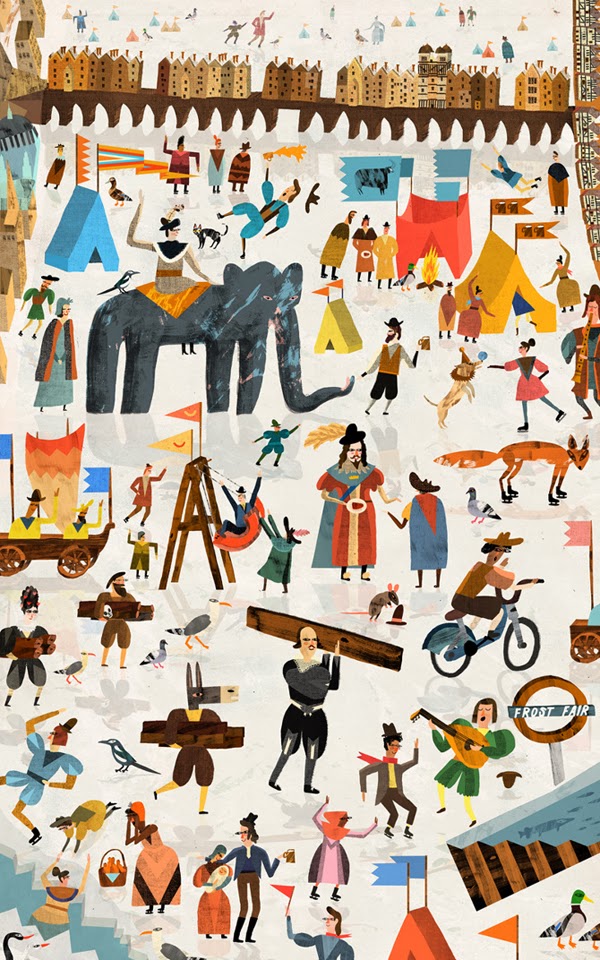 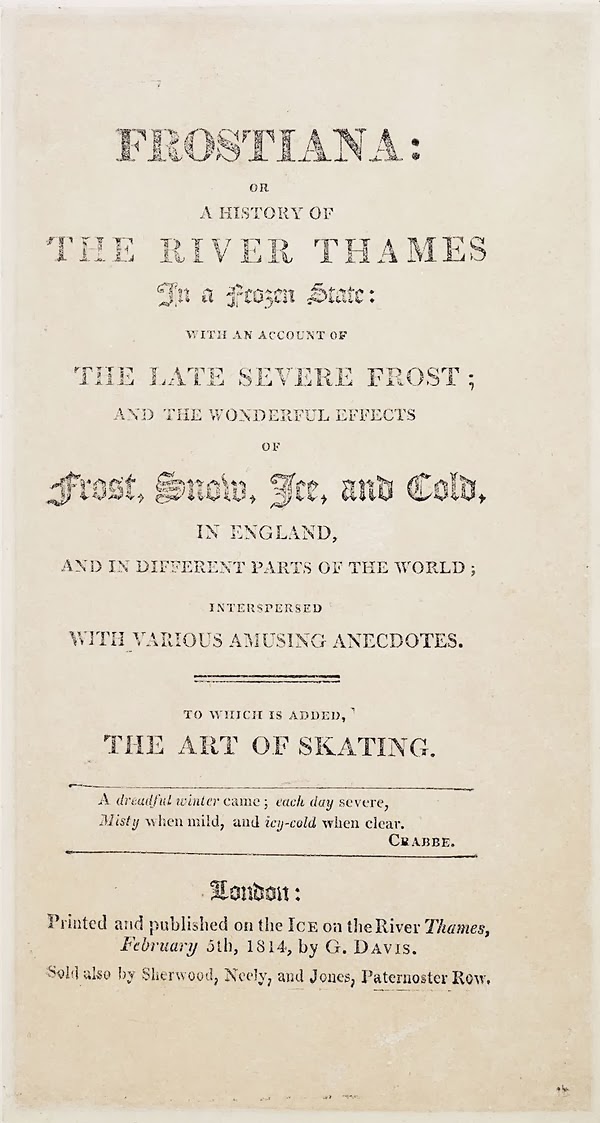 Frostiana: Or a History of the River Thames in a Frozen State; With an Account of The Late Severe Frost; and The Wonderful Effects of Frost, Snow, Ice and Cold, in England, and in Different Parts of the World; Interspersed With Various Amusing Anecdotes. To Which is added, The Art of Skating. (yes, that is just the title), was printed and published by George Davis shortly after the 1814 Thames River Frost Fair. The title page of this souvenir booklet, with it's ridiculously long title was handset in cold metal type in arctic temperatures and printed on ice at the fair. Even though Davis printed the rest of the book in his warm shop, it was as close to live-tweeting as one could possibly conceive in the early 19th century. (Not sure when the hashtag symbol was invented...) A first edition of Frostiana, with his many accounts of the Frost Fair, anecdotes about winter sports, construction advice for an ice house, and recipes for ice cream, sold at auction in 2008 for £320, or roughly $500. You can find a pdf of it from the National Oceanic and Atmospheric Administration to download here.
Image source: Atlas Obscura 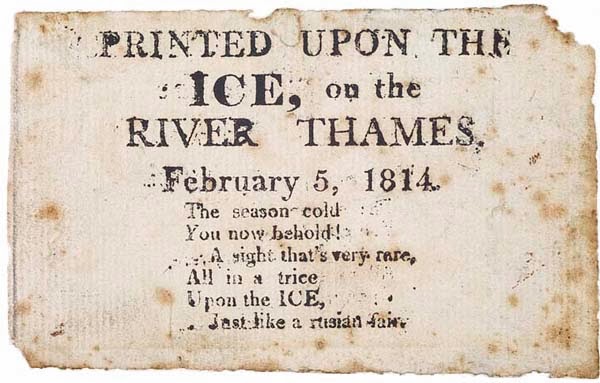 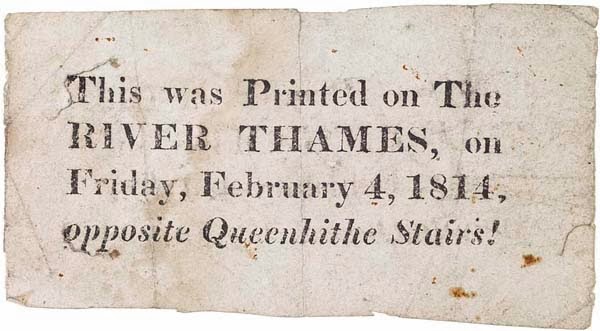 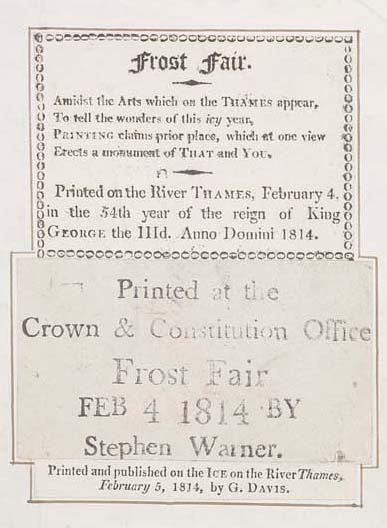 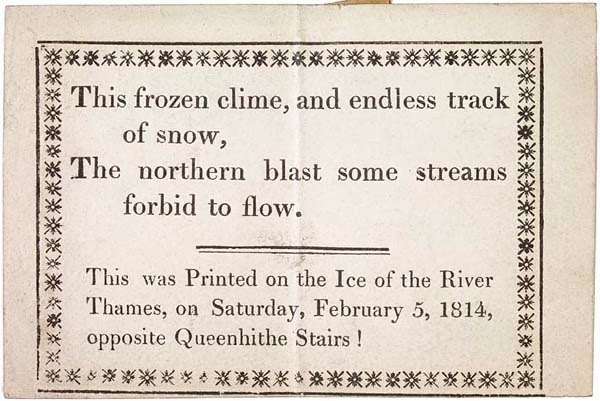 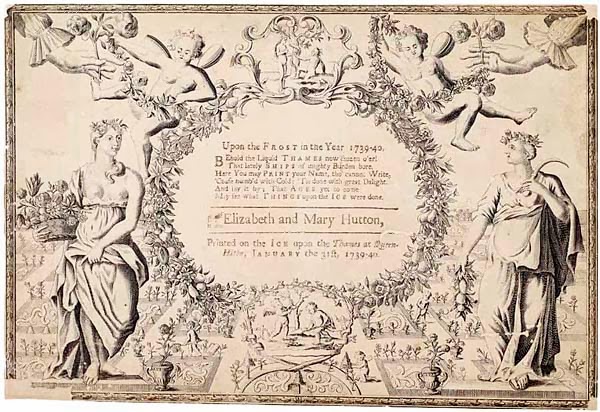 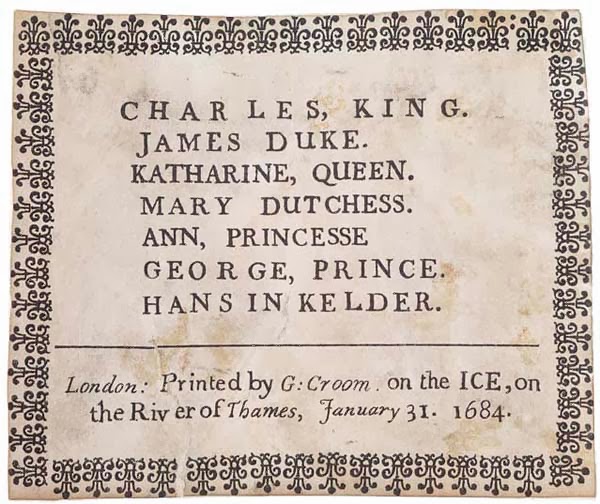 Until March 30th, Frozen Thames: Frost Fair 1814 is on exhibit at The Museum of London. Below is a brief video about the exhibit.