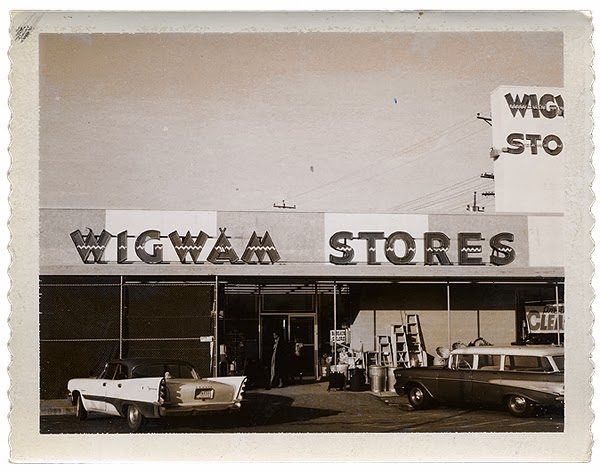 This fabulous collection of Polaroid photos on RoadsidePictures Flickrstream once belonged to an employee of a sign company in Washington state. Most of the photos are taken in and around the city of Tacoma in the 1960s with a Polaroid Land camera. Some of the old black & white Polaroid films produced the most rich, warm tones and detail, but they would fade away completely unless you gave each print a stinky preservative coating with a roll-on stick. All of these Polaroid photos are remarkable for their historic, typographic, AND photographic significance. Though most of these Tacoma signs are now long gone; some still show vital signs of life. Many, including this Wigwam, I actually recall from my youth. With their large "teepee type" signage—they were much like the K-Mart of their day. I do appreciate how the A in Wigwam reveals itself as a teepee, yet someone forgot to mind the gap between letters. 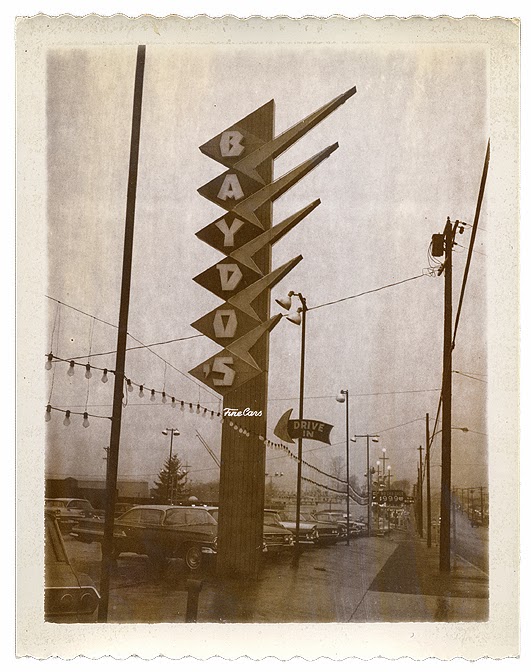 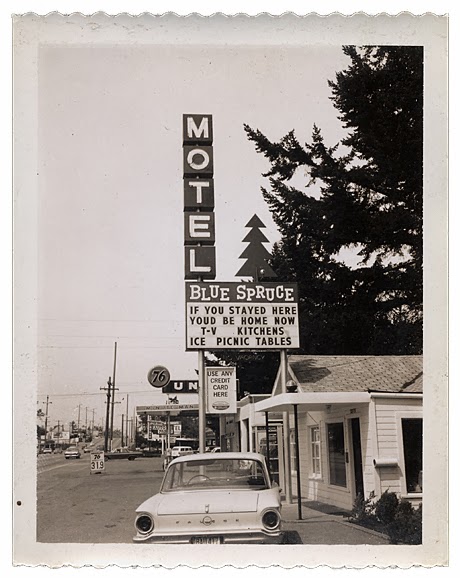 This homey motel still exists on Pacific Avenue South. But do they still have ice picnic tables? 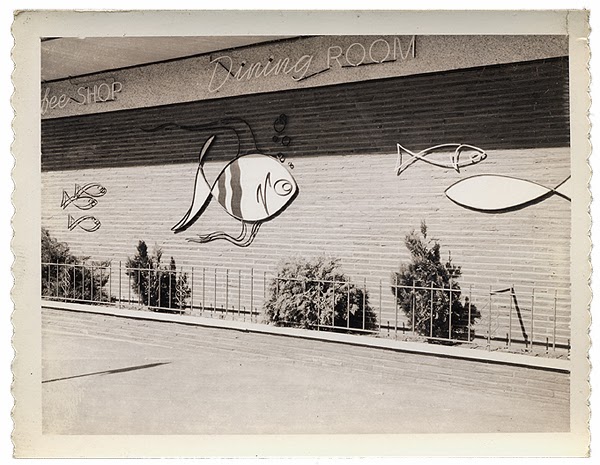 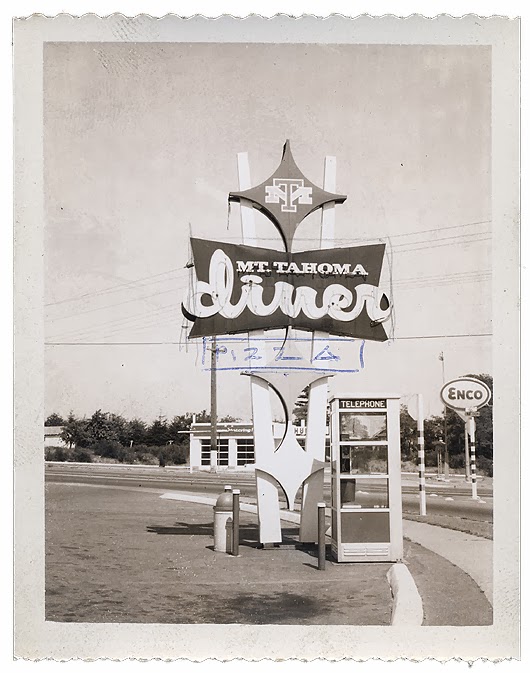 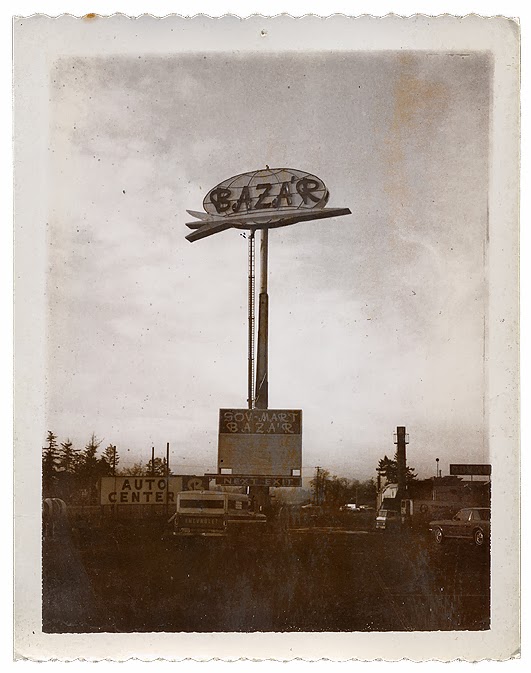 I definitely recall this towering sign for the discount department store "Gov-Mart" which later changed its name to the "Gov-Mart/Baza'r" near the Fort Lewis army base, just South of Tacoma. Is that a missile underpinning that bizarrely ugly type? 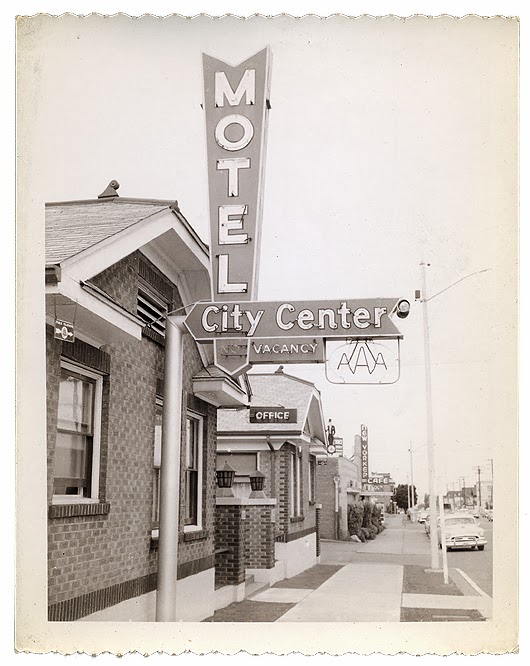 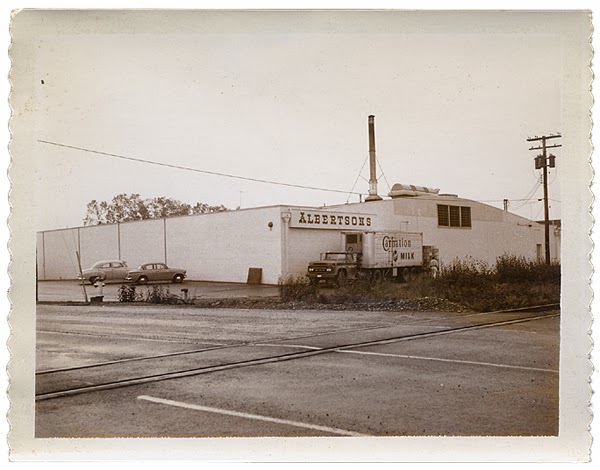 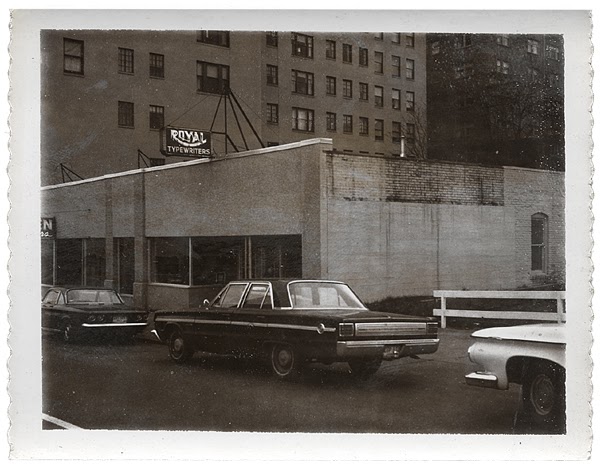 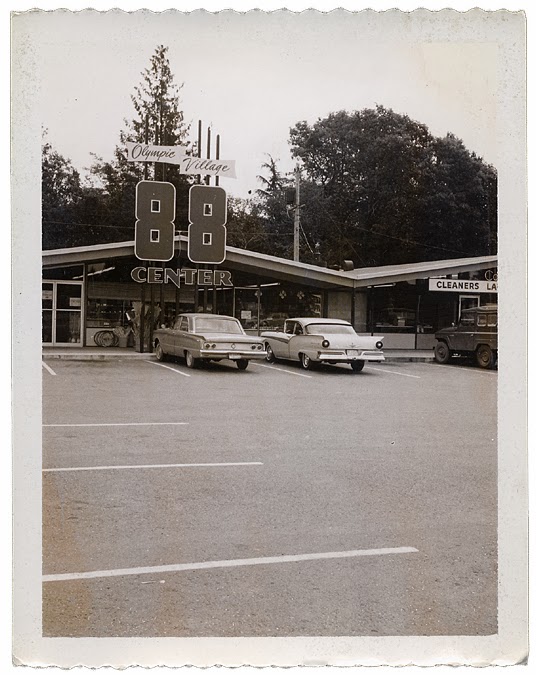 This 1960s Olympic Village, in nearby Gig Harbor, must have made a desperate pitch for the 1988 Summer Olympics? 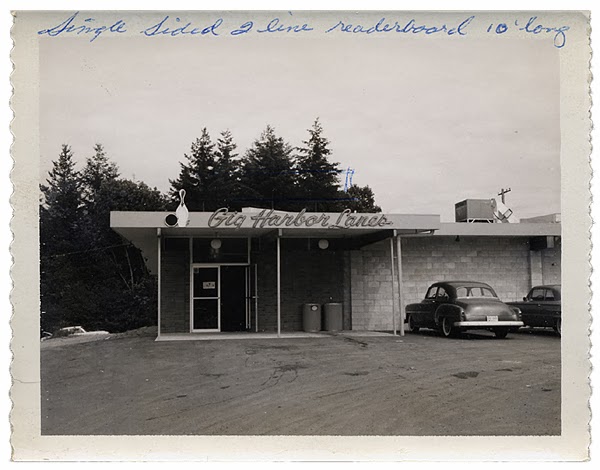 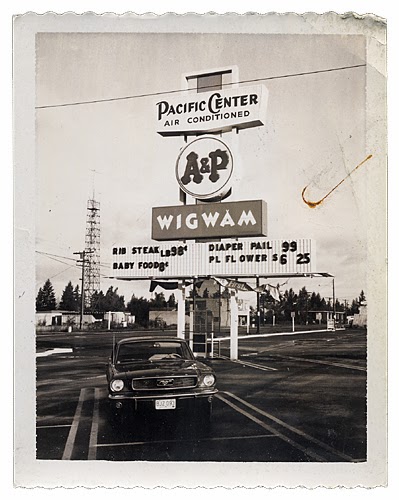 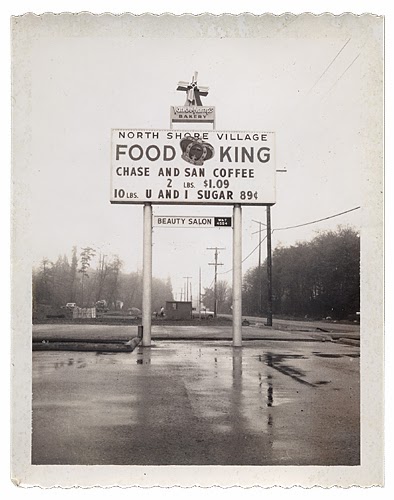 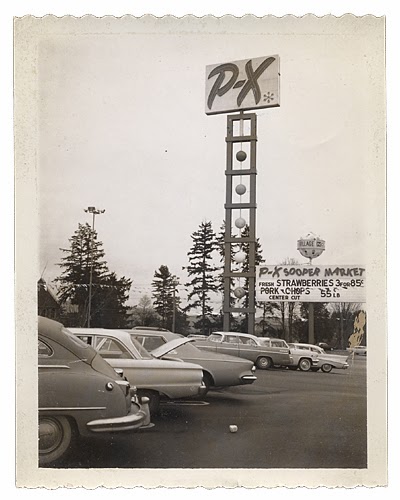 I believe the P-X Sooper Market was located on the military base. Their sign, with the distinguished looking ladder and suspended colored balls, had considerable character. In the far background, note the spinning "Norge ball", as they were affectionately known. Norge Village Cleaners had one of the grand old signs spiraling across America's laundromat landscapes in the 1960s. A few of these polka-dot globes still remain, but they are rapidly disappearing sadly. The "Lucky" sign below is not so lucky. They vanished altogether. 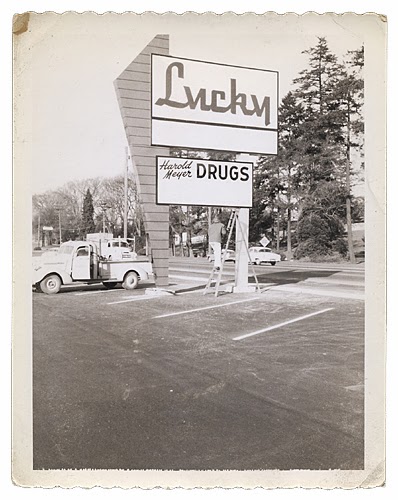 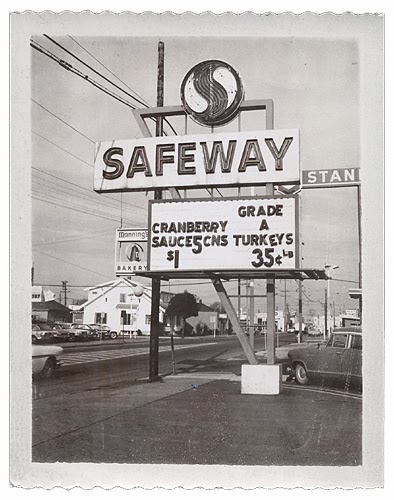 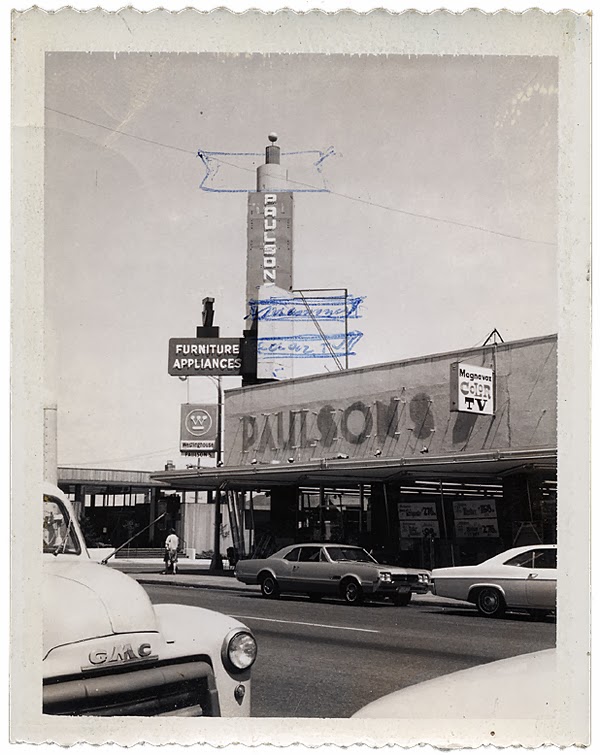 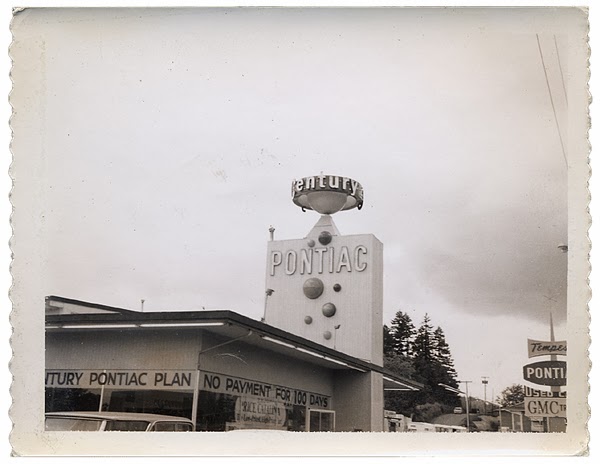 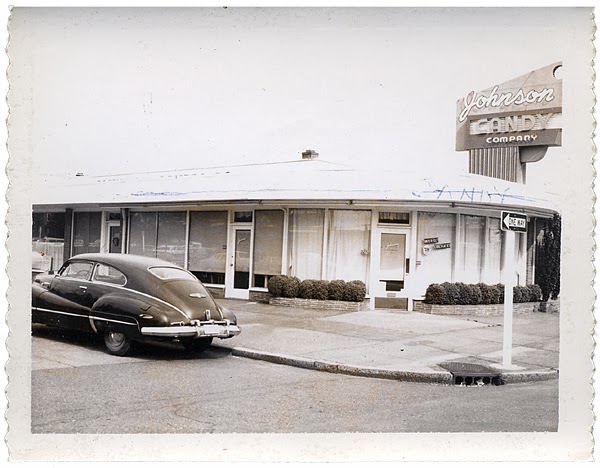 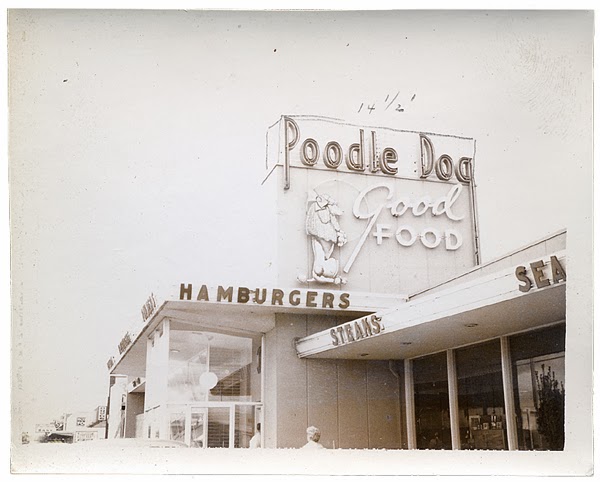 After over eighty years, the Poodle Dog restaurant and Pup Room, just off of I-5 in Fife, is still open seven days a week. This diner's great old signage was replaced probably shortly after this photo was taken, but it is still a treasure. Also from Roadside Pictures, is this old matchbook cover. For more Tacoma signage photos, be sure to check out his pool of Polaroids here. Not one Polaroid of Bob's Jave Jive on South Tacoma Way; but this roadhouse was a roadsign all itself. 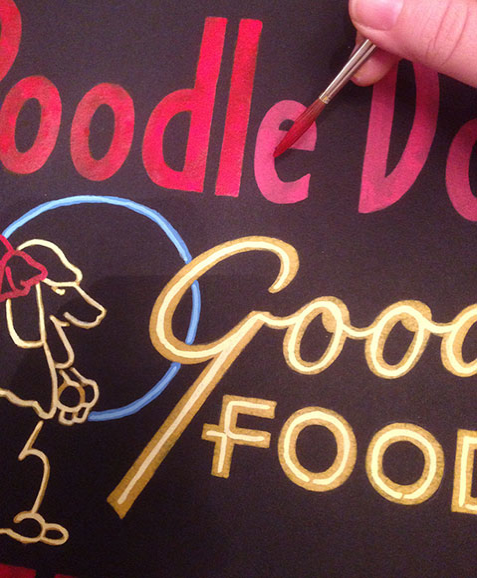 Lastly, but not leastly, my good friend Chandler O'Leary of Tacoma, recently painted an homage to the old Poodle Dog neon sign. She hand-lettered a day and a night time version, in addition to many other memorable old neon signs from Tacoma. They are all currently on display in her "You'll Like Tacoma" exhibition. Learn more about it here.
Posted by Jennifer Kennard at 2/24/2014