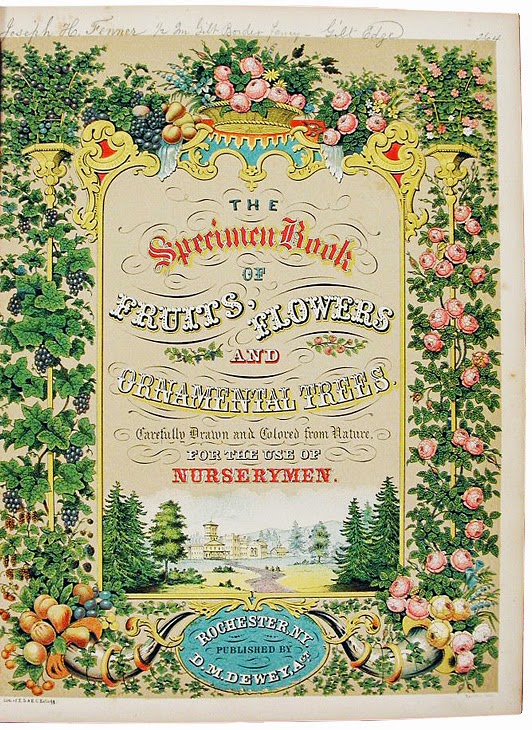 Title page for one of D.M. Dewey's specimen books.
Source 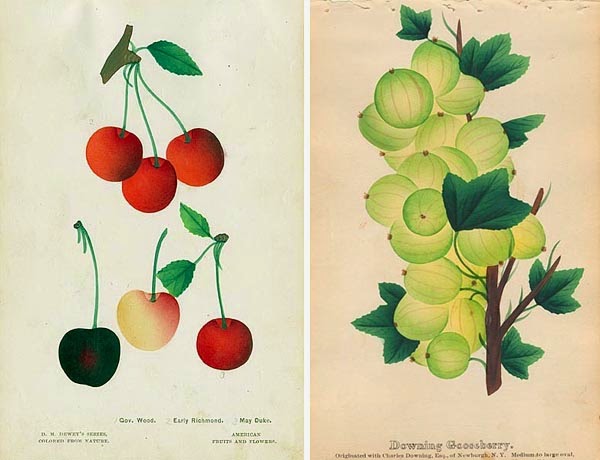 Source
Dellon Marcus Dewey (1819-1889) was a bookseller, publisher and art patron in Rochester, NY before he became one of the 19th century's most enterprising businessmen, printing and selling colorfully stenciled book plates of botanical illustrations "for the practical use of nurserymen, in selling their stock." He employed teams of immigrant artists and colorists in the mid-1850s to paint and stencil several thousand botanical plates of various ornamentals, trees, shrubs, fruits and vegetables. By 1859, Dewey's price list contained some 275 different plates. Once completed, the colorful book plates were assembled into handsome octavo catalogs and portfolios customized for the traveling salesmen known as "plant peddlers" of the floral and nursery trade. Dewey was not the first to devise this practice of providing botanical illustrations to sell seeds and plants, but he was the first to expand the process by relying on the time-honored stencil production process which came to be known as "theorem paintings." Prior to the development of chromolithography, this multi-layered stencil process was the most striking and effective method of producing colored multiples at the time. Although quite rare now, Deweys' polychromic watercolor artworks can still be found in complete book sets, and continue to be valued for their exquisite beauty. This 1875 plate book of 91 images shown below was sold on eBay a year ago for about $400. 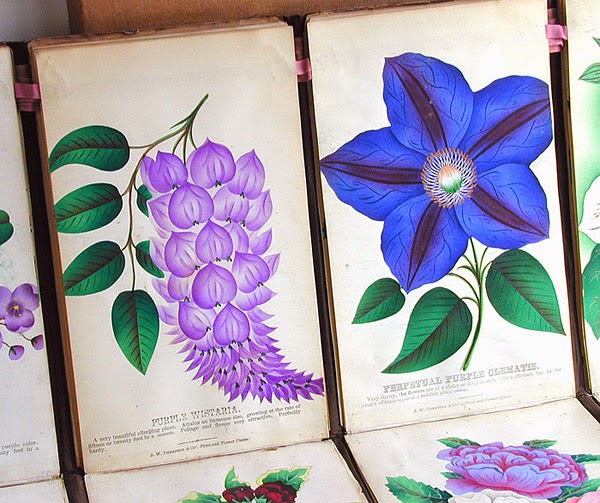 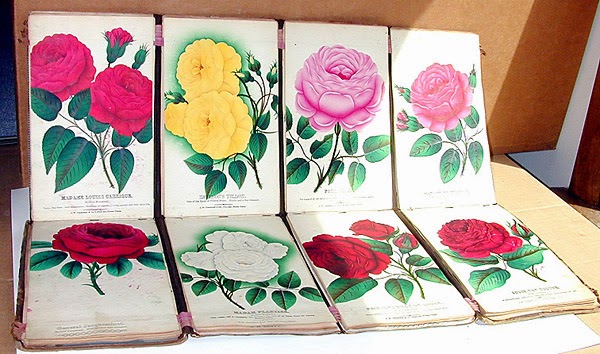 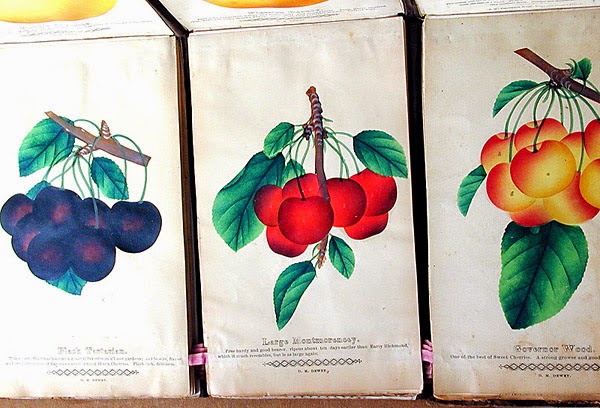 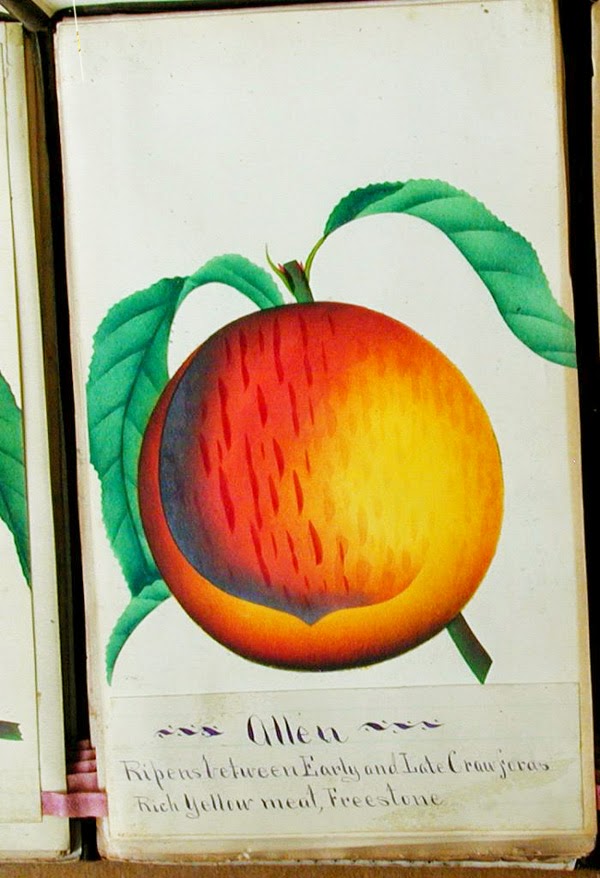 To produce each stenciled image, artists would use transparent watercolors to build up areas of tone and color. Stems, tendrils and small details such as the small, red paint strokes seen on the peach above, were painted freehand for added effect on many images. The stencils were most likely made of paper, but brass could easily have been used and would have endured much longer. Paint and inks were carefully applied through these stencils using a brush or dauber of sorts—creating vivid color tones and values as layers were added. A similar process to this, called porchoir, was later popularized in Europe in the early 20th century, however that process relied upon a printed "key plate" to which stenciled color was applied. Greater detail of the "theorem" stencil and brush process can be seen in the grape images below. 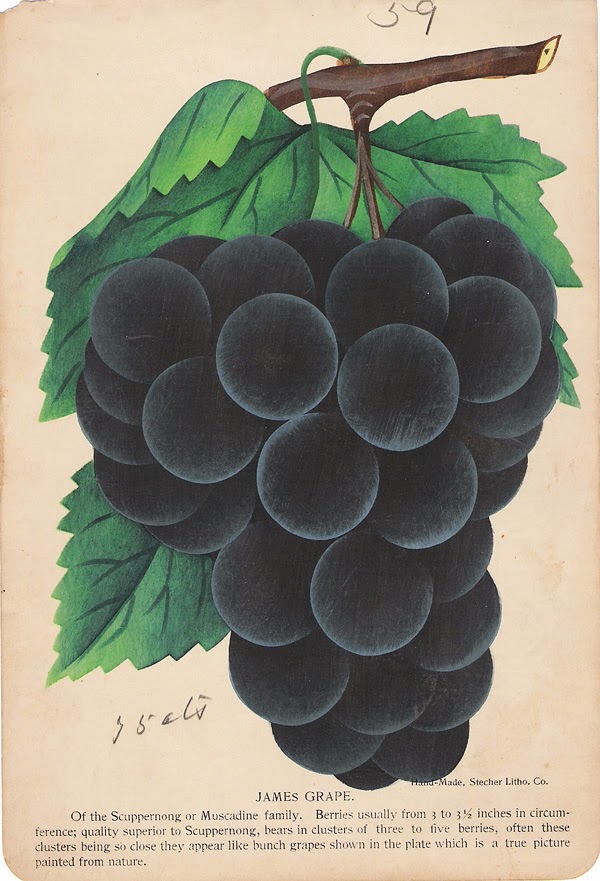 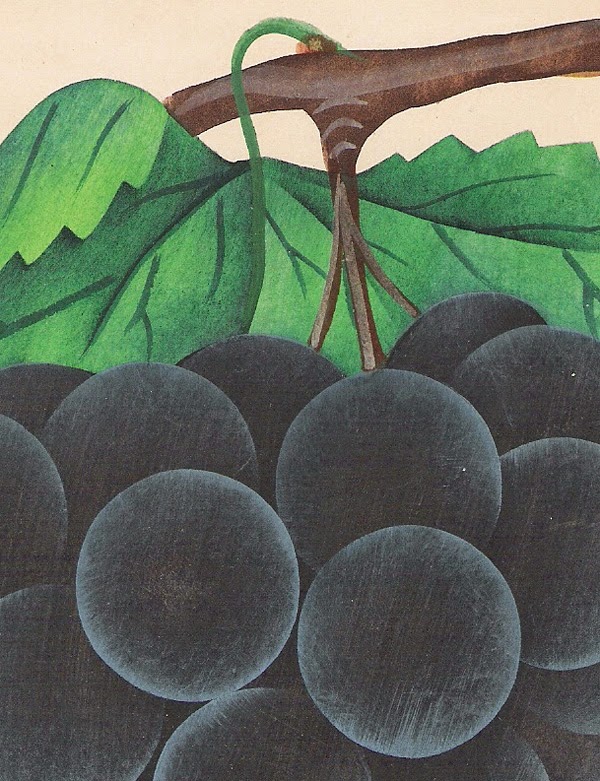 Source
In the wake of Dewey's successful enterprise, the nursery trade flourished in Rochester, NY, bringing with it many imitators of botanical plate books. Skilled craftsman and printers soon followed and by 1871, the first chromolithographic company opened in Rochester, which forever changed the landscape of the nursery business in the US. 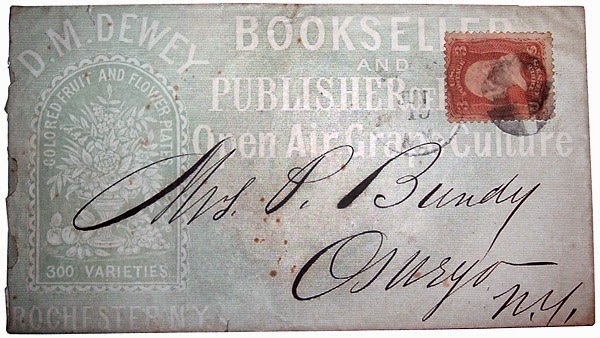 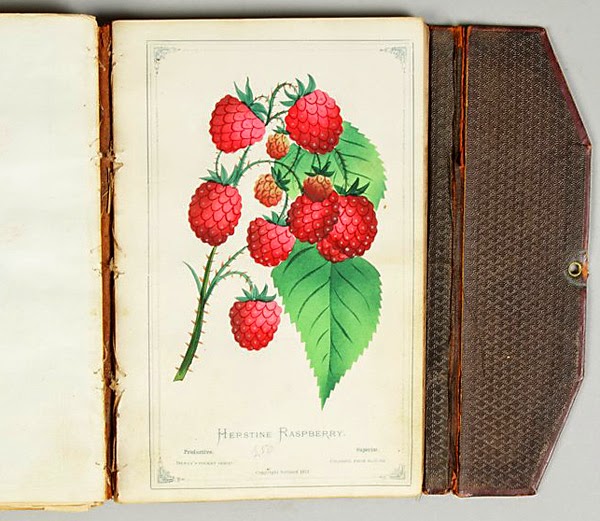 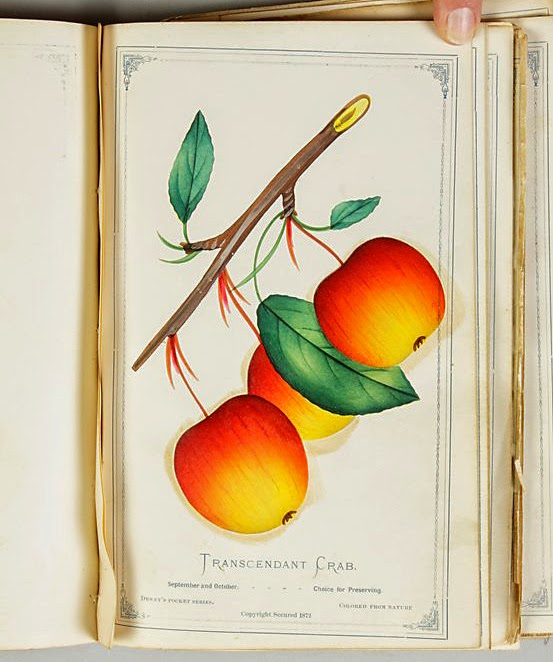 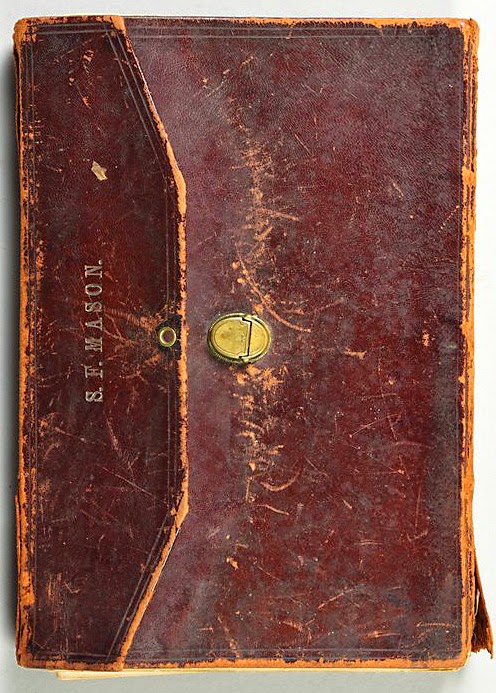 This 1872 D.M. Dewey plate book shown above appears to be stenciled plates. Later editions, such as this handsome edition below were entirely printed with chromolithographed plates. This stenciled book happens to be in reasonably nice shape and still available here for a rather large sum. I just have my eye on that sweet grape arbor below. 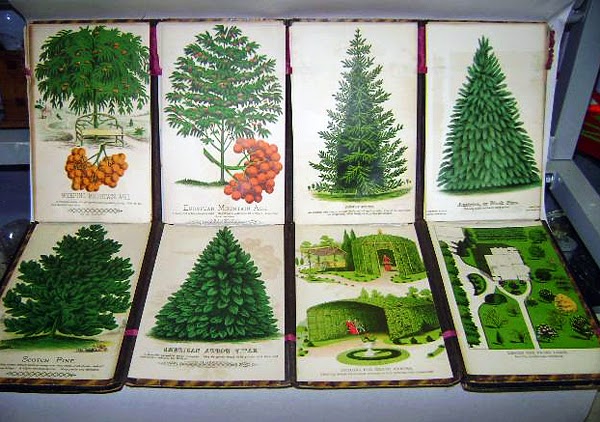 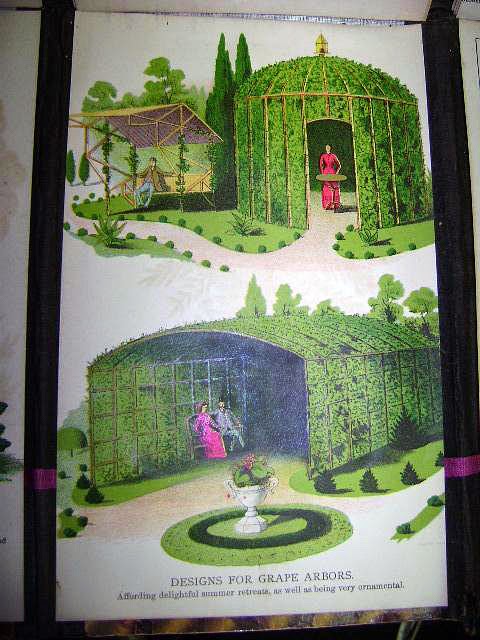 By 1881, Dewey's company offered over 2400 varieties of book plates of plant specimens. In the wake of his successful enterprise, the nursery trade flourished in Rochester, NY, bringing with it many imitators of his botanical plate books. Skilled craftsman and printers soon followed and by 1871, the first chromolithographic company opened in Rochester, which forever changed the landscape of the nursery business in the US. Confident that chromolithography was the solution to "a greater variety and better plates," Dewey consolidated his nursery supply business with the Rochester Lithographing and Printing Company in 1888. One year later he died, "but the demand for plate books did not" according to Tim Hensley of the Urban Homestead, and "no less than a dozen Rochester printing companies would follow in his wake." Hensley points out that each printer had a style uniquely their own as they each employed their own team of individual artists. Some particularly stood out such as the work of the Stecher Lithographing Company (1887-1936) who went on to produce posters, labels and trade cards for seed companies. The Stecher plates of the Salway peach and Le Conte Pear below from Hensley's site, Rood Remarks, are so exquisite, I find it difficult to believe they are chromoliths. I'm fairly certain they are a combination of chromo and stencil artwork of the tendrils and leaves. The last image of the Greensboro peach printed by the Vrendenburg & Company of Rochester is most certainly a chromolith plate. They are all mighty fine fruit plates. 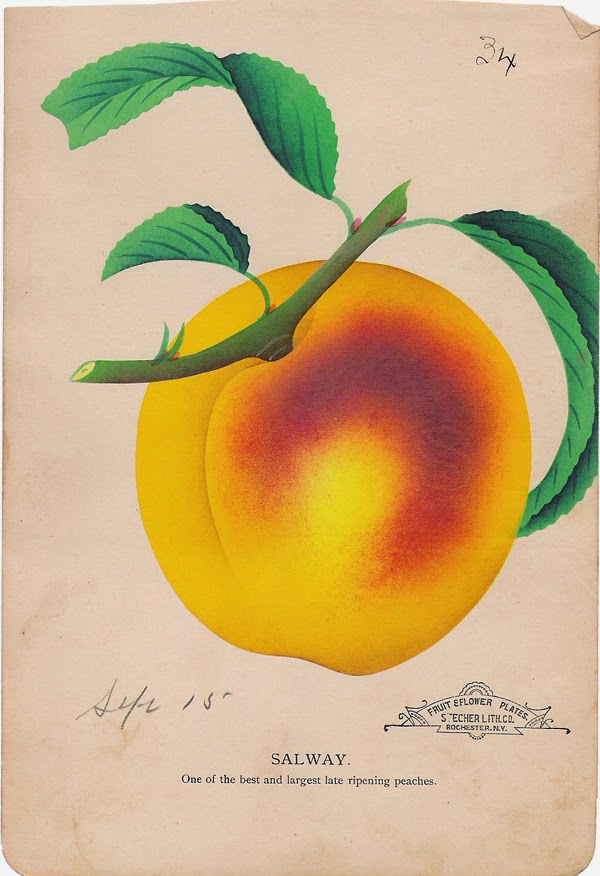 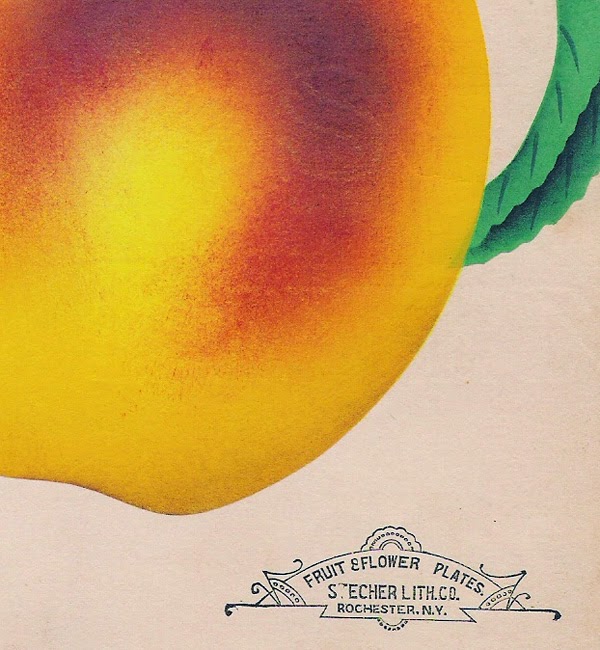 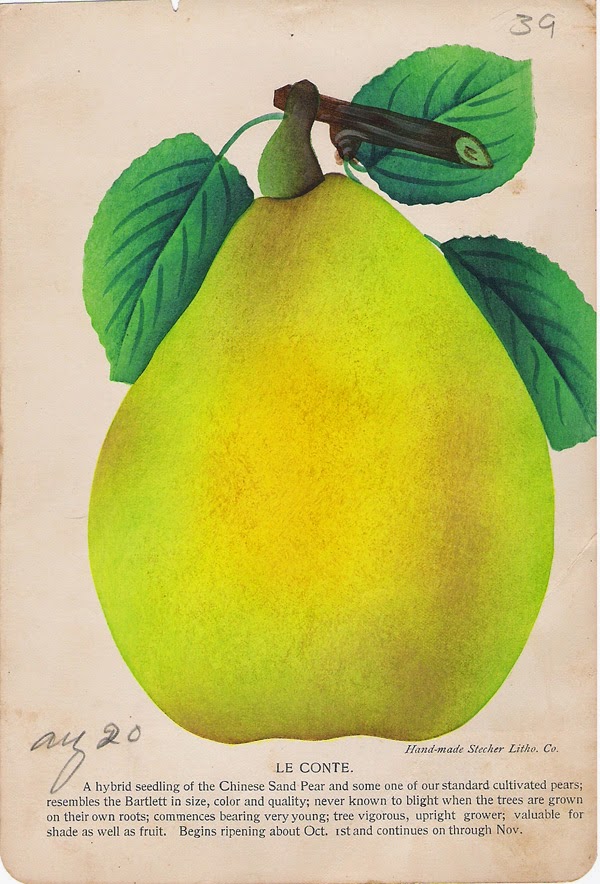 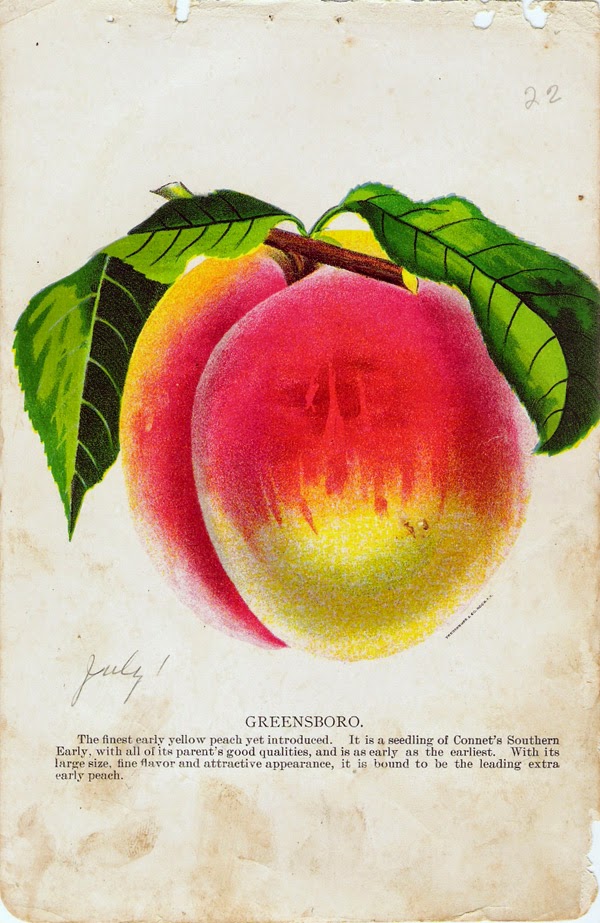 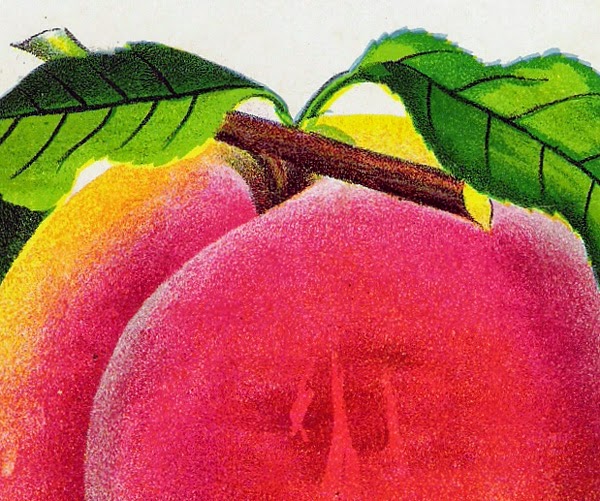