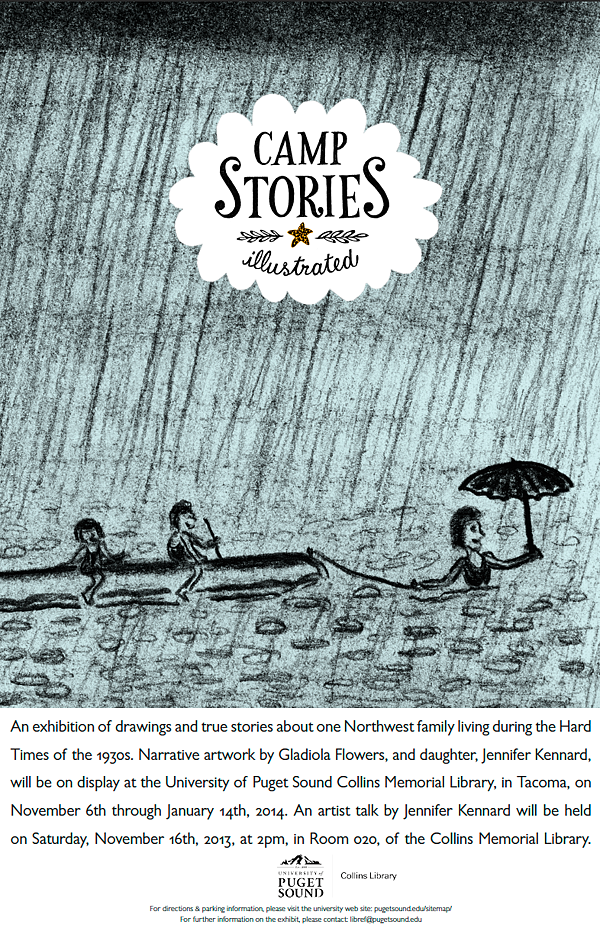 This past January I lost my adorable, fearless mother, Gladiola Flowers, at the age of 85. She had an unflappable and enthusiastic spirit for life. At the age of 83, she chose to legally change her name from the former Gladys (Rasmussen) Robinson, as she wanted to become a perennial. She defied death several times and spent sixteen long years in a nursing home, living a rich, full life after Multiple Sclerosis had left her a near quadriplegic. Thirty years earlier, she took up drawing as a means of expression and of reconciling the profound loss of her mobility. She drew beautiful macro studies from nature mostly—gathering flowers, ferns and leaves as her subjects. But it was a series of unusual charcoal drawings she produced during that same time which I find most remarkable. With little training, she worked diligently over the course of one month to complete a set of thirty-two drawings from happy childhood memories living in the Northwest during the Hard Times of the 1930s. She kept a daily journal about this personal work, which is in a style best described as naïve "outsider folk art". Finding this journal recently, was like buried treasure. With her wry wit and love of family, she wrote to flush out the details and recollections of her 8 year-old self. After reading it, I was reminded how exhausting, yet therapeutic it was for her, and how overjoyed she was to take the task on thirty years ago.

Because of the local history her drawings represented, I first approached Jane Carlin, the Special Collections librarian at the University of Puget Sound Collins Library in Tacoma, with the idea of exhibiting my mother's work. Jane happily jumped on board, and encouraged me to include some of my own artwork in the exhibition. Though I admit I was a little reluctant to do so—over time, I came to think of it as an opportunity. Since I relish all of her colorful stories, I decided it would be fun to explore some new work, and add my own interpretations of them. 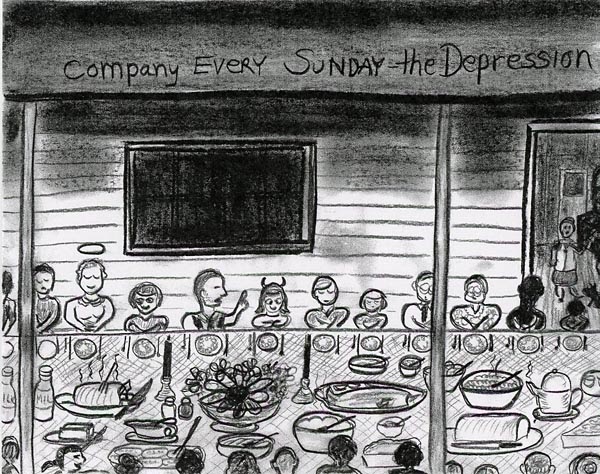 During Summer months, Glad's family of seven lived in a rustic one bedroom cabin they lovingly referred to as "Camp". It was built by my grandfather, Frank Rasmussen, and his brother Axcel in 1910, and located at Sunrise Beach, just Northwest of Tacoma, Washington, on the waters of Puget Sound. It had no plumbing or electricity, but a view of Mt. Rainier from the outhouse, and an artesian spring for fresh water and bathing. My grandmother was a true pioneer, and would bake bread in a wood-fired oven, sew quilts for the beds from old blankets, and can Summer fruits and vegetables, while my grandfather worked as a carpenter building houses and commuting by a small passenger boat. They faired better than most during the Depression, as they had fresh fish from the bay, and fresh milk, cheese and vegetables purchased from neighbors with cows and gardens. The five kids would swim and play on the beach all day, or hike in the woods all Summer long. Nearly every Sunday they shared their bounty with up to thirty friends and neighbors at a long table on their front porch. In this image above, Gladiola is the devil girl in the middle, being scolded by her devoutly Baptist father during the meal blessing, while my poor grandmother is hard at work in the kitchen. 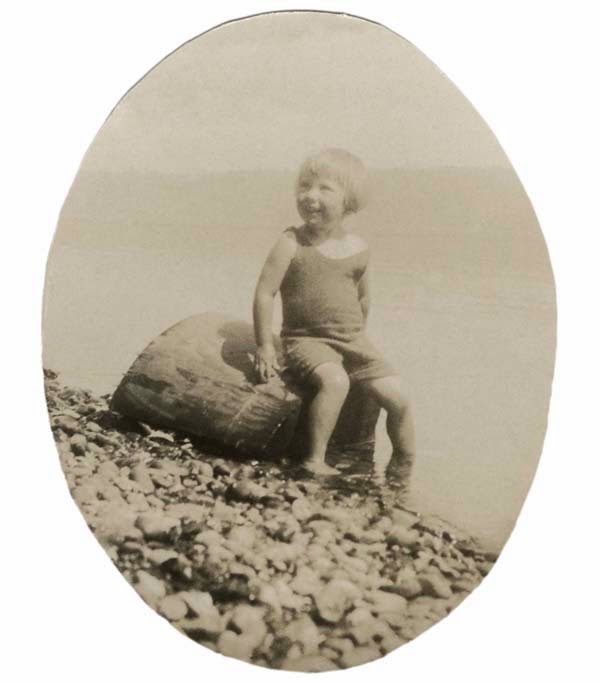 My mothers' "Camp Stories" has been a gift in so many indescribable ways. There were few family photos of this time, as this was beyond means; only the one photo above of my mother at age 4. I know I will be unable to complete all of my planned work before this exhibition opens, but those I do, I will share once the show opens. I expect to continue with more work in later months, as there is a wealth of material I would like to explore in different media and print processes. I'm delighted to be doing more creative work once again, and looking forward to where it brings me next.
My poster above provides more details of the exhibition which opens on November 6th, or you can visit the UPS events calendar. I will be giving a talk about the exhibit on Saturday, November 16th at 2pm in the Collins Library, room 020. All are welcomed!
Posted by Jennifer Kennard at 10/13/2013