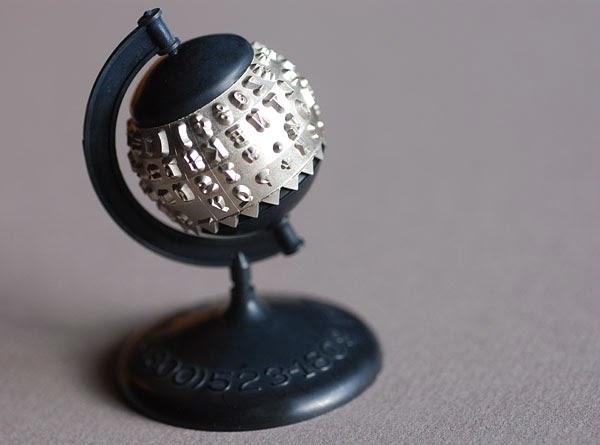 This ain't no disco ball. No, but it could be, however I actually like to think of it as "Planet Type" orbiting the celestial Typosphere. In truth, it is an IBM Selectric type ball, spinning on its axis, or more commonly known as an "IBM golf ball", so named as it resembles one in size. The type ball was originally engineered for IBM's Selectric Typewriter in the early 1960s, and offered an interchangeable typewriter font which rotated and tilted into position before striking each letter onto the page. The first monospaced type ball fonts came in a variety of styles and two sizes: 10 or 12 characters-per-inch. These features represented an enormous innovation for IBM at that time, and a rather rudimentary introduction to the world of desktop publishing. 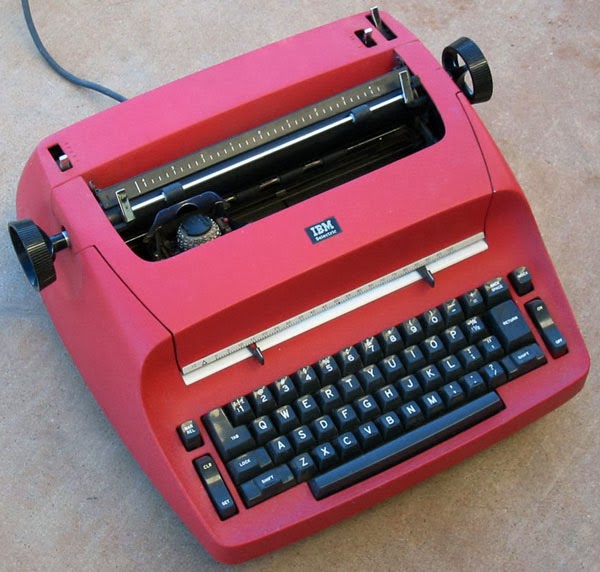 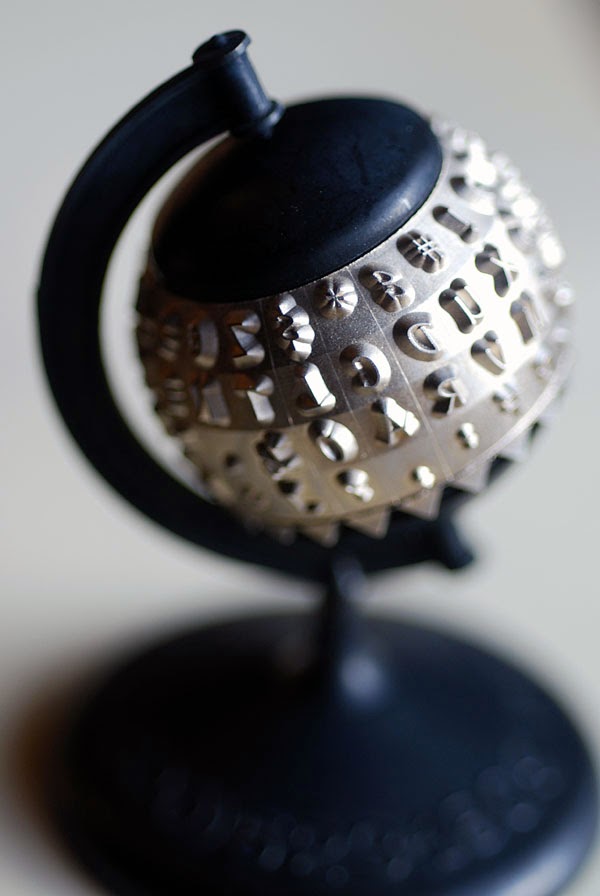 This sweet little orbital type ball is actually the first of its kind I've come across. If memory serves, the IBM type balls typically came packaged in their own little clear plastic cases, ready for instant installation, so you could switch fonts with ease. I purchased this miniature "type planet" globe from a dealer who knew less about it than I, but presumed it was never something IBM actually distributed.
Soon after discovering the little "Planet Type" several weeks ago, my old friend and typewriter devotee, Alyson Kuhn, coincidentally shared the happy news of a recent endowment to her type ball library of fonts, given to her from typewriter "Repair Saint", Gerry Wallace, in gratitude for her many referrals.

Not only was I impressed with the news of her kind endowment, but I had to inquire about her lovely personal stationery. She responded in kind with a second decorative envelope filled with various examples of her crested notepads which were designed by Michael Osborne, and letterpress printed onto Crane's papers by Judith Berliner of Full Circle Press. For the full background story read her earlier report on Felt & Wire. 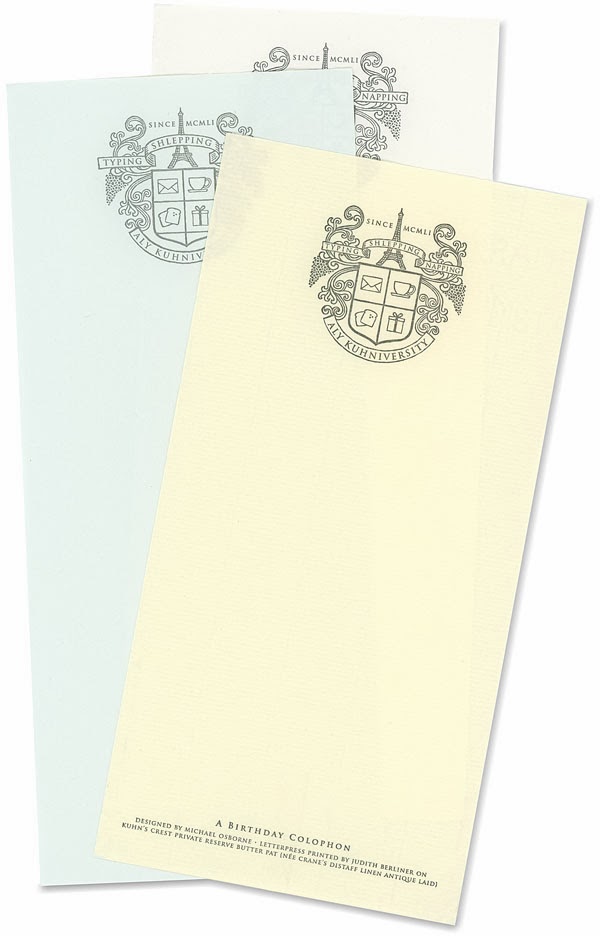 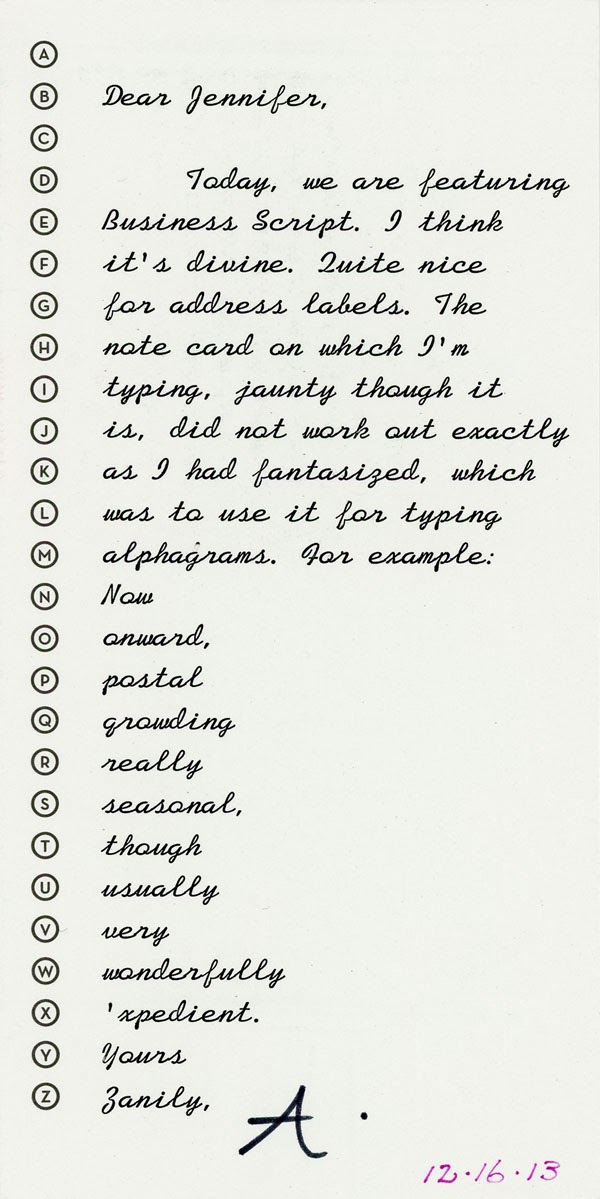 The next handsomely engineered enclosure within this mailing, was Alyson's Alphagram (or Alysongram), with letterpress printed alphabet, vertically arranged to match the line-spacing of her typewriter. Her delightful note was typed in the lovely "Business Script", which I find quite expressive and characteristic of many mid-century script fonts in use at that time, such as Brush Script and Kaufmann. 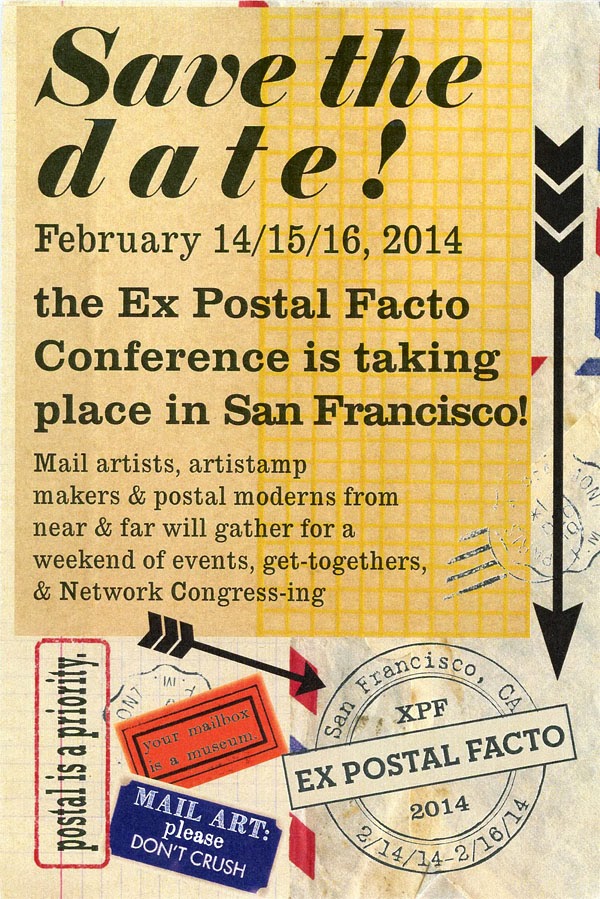 The last enclosure was a save-the-date promotional postcard for Ex Postal Facto 2014, an upcoming 3-day conference celebrating mail art, faux philatelics and postal modernism, to be held in San Francisco in mid-February. This could be a type ball for postal art people.
Posted by Jennifer Kennard at 12/30/2013