A Typographical Tour to Yesterland 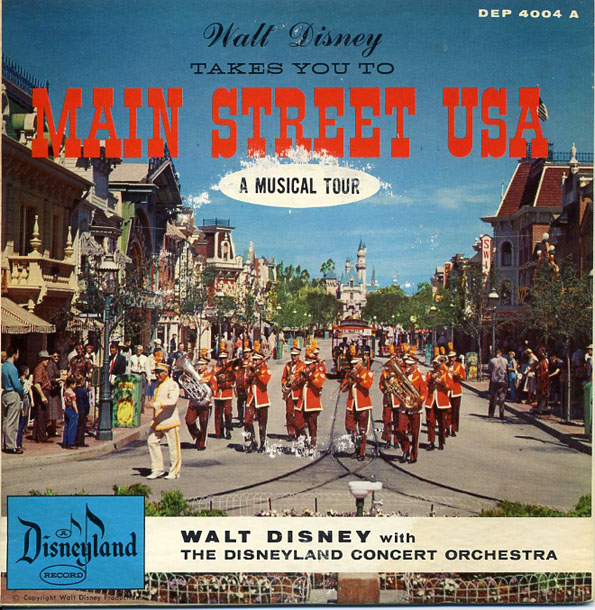 Forget the crowds and long lines at airport security... just click your heels together three times and wish upon a star, and you'll be transported back to 1960s Disneyland quicker than you can say Jiminy Cricket. First stop: Main Street USA, where Walt Disney's dream of a family amusement park first came true nearly 58 years ago, on July 17th, 1955 in Anaheim, California. Every building on the Main Street town square was a model of an early 1900s era structure and built at 5/8ths the original size.
The mid-60s record album covers featured here are from Grickily's amazing Disneyland Souvenirs Flickrstream. They aren't the most attractive representation of mid-century design by any means, but I am singling them out for both their font choices and applications. The first three appear to be designed by the Disney marketing machine without too much afterthought along with scores of other Disneyobilia. The designer(s) used a rather formulaic approach of slapping a title on the top third of the cover in a lettering style denoting the era or particular place it represented. In the Main Street USA example above, the bold square serif font is not a bad choice to evoke a late 19th century style, but it is uninspiring and incompatible with the photo. And the ill-matched combination of the bright red letters on the deep blue sky is particularly unattractive, making me think this was either designed by committee or an amateur. Main Street was pretty mainstream. 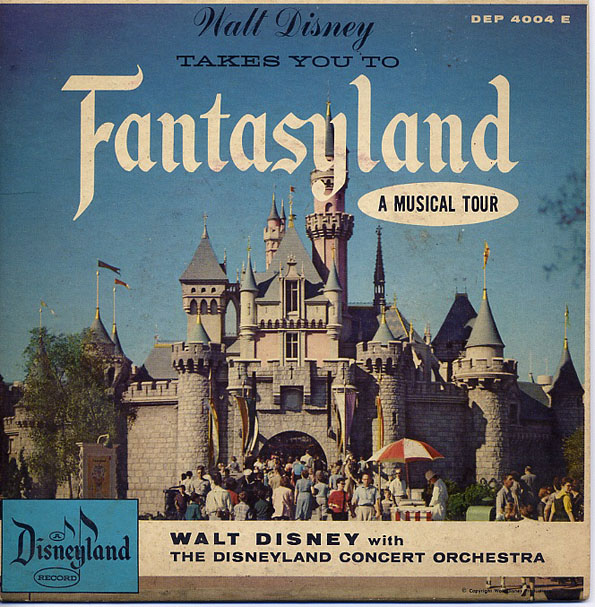 Fantasyland took a cue from the first Disney logo design and applied a blackletter revival font style on the cover. I do like this font choice, but again, not the application. I can only assume the blackletter choice was to tie it to the Bavarian style castle in the photo, which does little to represent the "happiest place on earth." 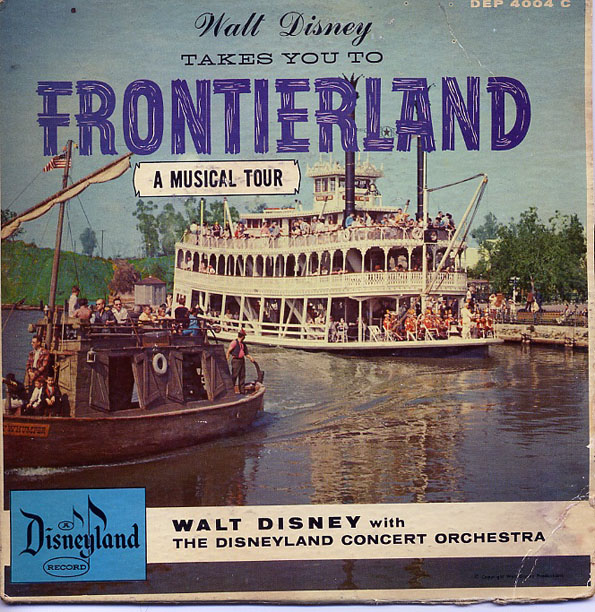 While I do love this style of "broken board" type, this Frontierland cover looks like it was designed by Goofy. Who else would place the paddle boat's smoke stack in the unfortunate position where it interferes with the R?
The three covers below appear to be designed by a different designer and with a little more forethought. They are 7" singles, each with an illustration which provides more interest. The "broken board" Adventureland version below gives it that "Tom Sawyer" appeal, and the background doesn't compete with the letters this time. 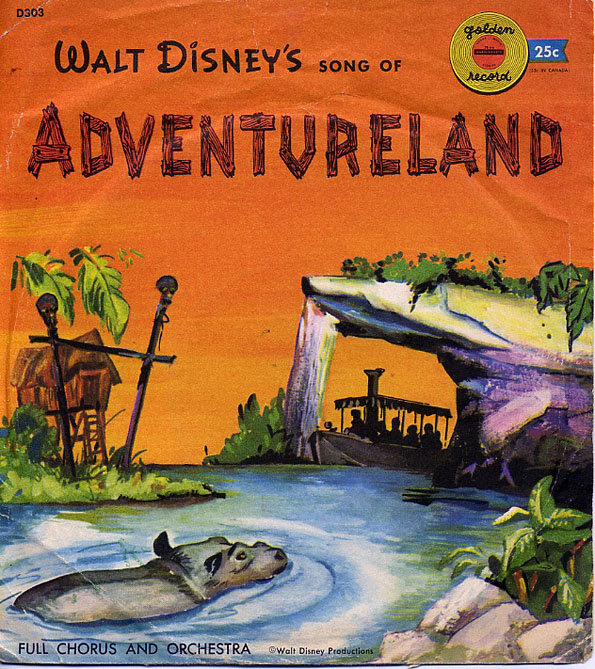 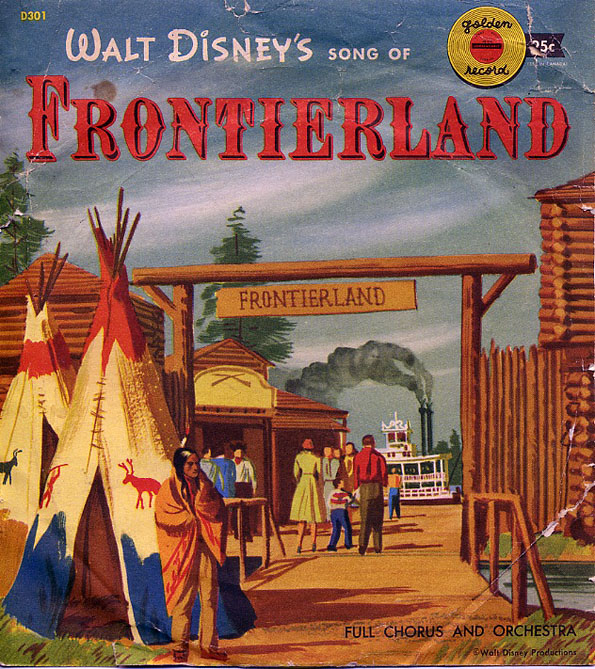 This design is less appealing. The Tuscan style font for Frontierland feels almost as out of place in this frontier fort as the tee-pees and the Native American standing just outside the gate. 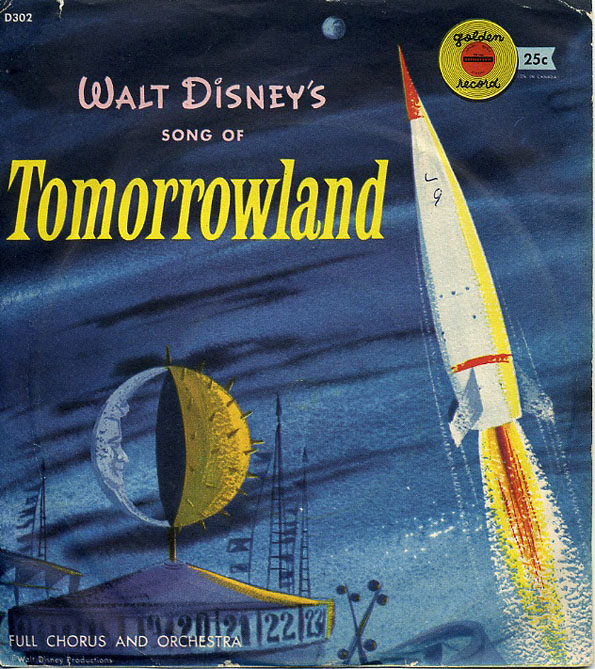 Off to Tomorrowland, my favorite of this bunch. I love the artwork as it reminds me of some of the great illustrative work of so many of the early Disney animation artists. But why is it that Tomorrowland has to be italic? Is it supposed to be more futuristic by making it forward leaning?
This little type tour to Yesterland fails to meet smart design solutions, yet is a great example of what happens when you get design by committee or nonprofessionals. Choosing fonts and combining them successfully with images requires more forethought and attention than simply applying a clichéd approach. All six of these covers are from one of the richest periods of design of the last century, yet they fail to achieve the character or the simplicity that is often associated with some of the best mid-century design. At the time, Disney had one of the greatest assemblies of artists, illustrators and designers on staff of any company anywhere, yet someone was off in Never-Never Land on this one. 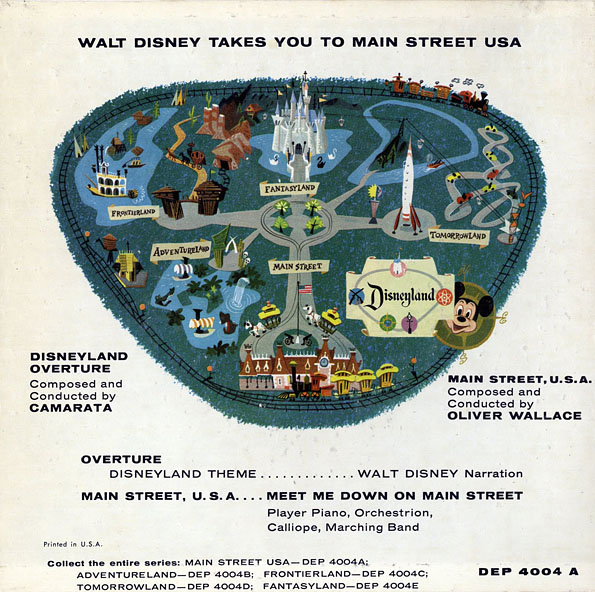 This is the backcover which appears on all the albums.
::Via Vintage Disneyland Tickets.


For your listening pleasure...I promise it's NOT "A Small World Afterall" ; )
Or download them all here.