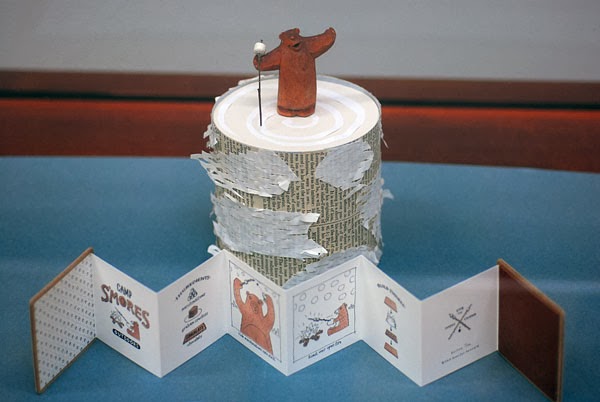 In yesterday's post on the Camp Stories, Illustrated exhibit, I posted a small portion of my mother's artwork chronicling her childhood memories living in the rustic one-room cabin lovingly known as "Camp". Curating this exhibit required a great deal of attention and time to edit and prepare my mother's work, which took precedence over my own. Therefore, much of my own work is still on the drawing board, yet I am eager and determined to complete it in time. Those which I did complete, are in editions—with exception to the campfire—and they will be for sale soon. 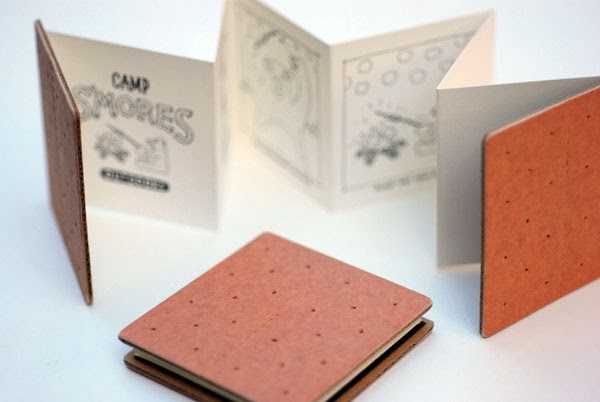 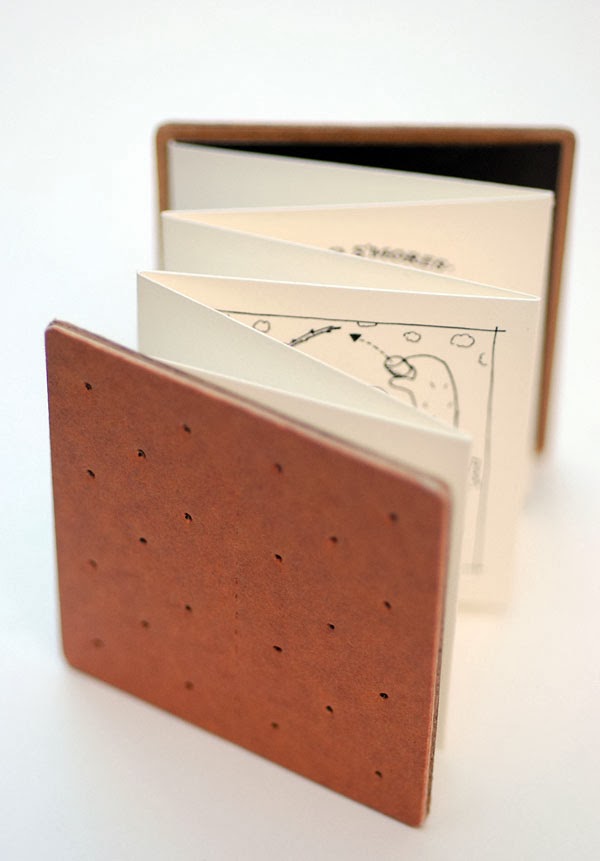 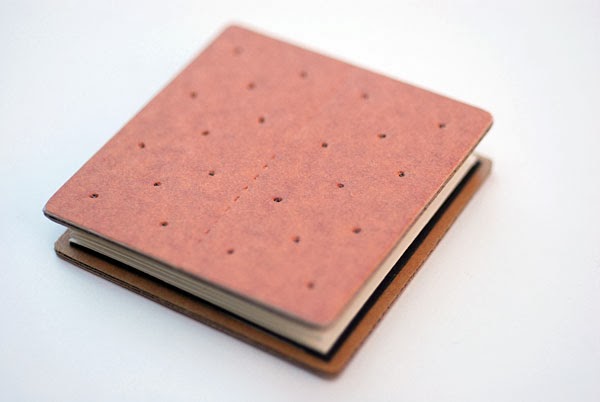 Camp S'mores Outdoors Recipe Book
Borrowing from the theme of Camp Stories, I chose to construct a paper S'mores accordion book with an illustrated recipe for this All-American favorite campfire treat, consisting of roasted marshmallows and chocolate, sandwiched between two graham crackers. For the uninitiated, the name for this delicious dessert evolved after campers typically consumed them so quickly, they were prompted to immediately ask for "s'more." The first published record of this traditional treat is said to have been in the 1927 Girl Scouts Handbook. My Camp S'mores recipe book consists of laminated cardboard graham crackers (aren't they all?), white paper marshmallow pages and a choice of dark or milk chocolate endsheet filling. Laser printed and porchoir illustration; packaged in a glassine wrapper. 2.5 inches square in an edition of 100. Paper marshmallows sold separately. 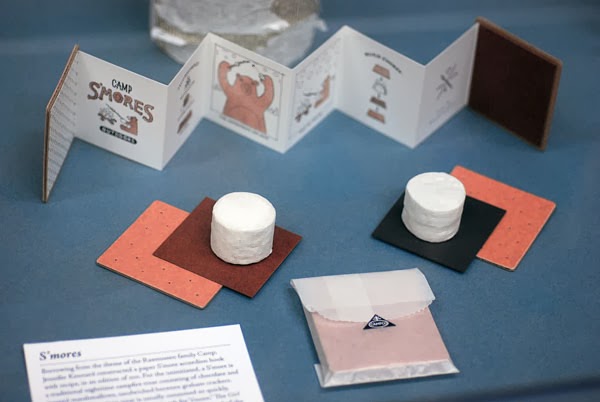 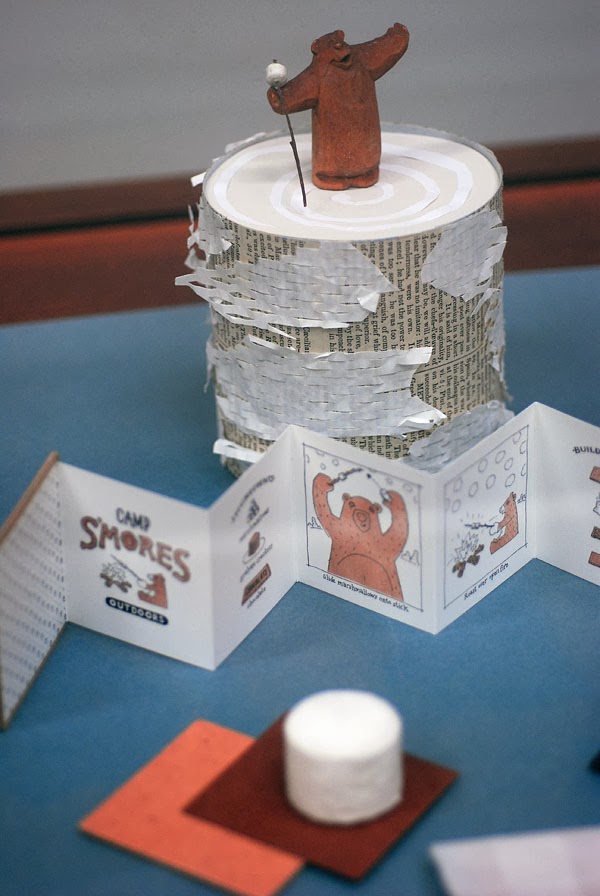 Message in a Bottle
This mechanical paper construction derived from one of my mother's stories about finding a message in a bottle on the beach. Knowing what an imaginative kid she was, I pictured her making her own message in a bottle to ship out to sea. I chose to fashion mine all of paper. When closed (as seen on right), the message is seen inside the bottle. By pulling the exposed thumb tab at bottom straight down, the cork simultaneously pops up to expose the message. It is a very simple device, with an element of surprise. This digitally printed piece is in an edition of 25. 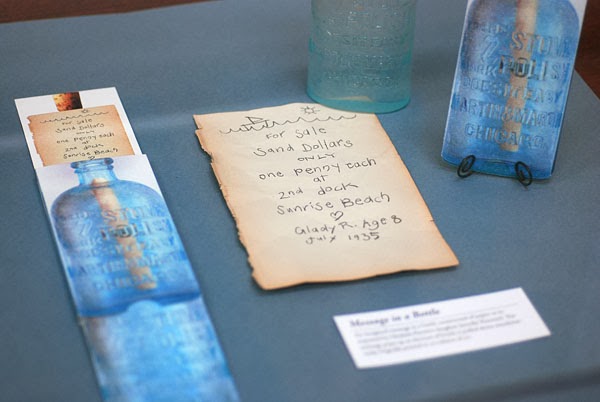 Sunday Dinner at Camp
The most iconic piece I created for this show, was also the most challenging of any. I produced about 5 or 6 models, testing sizes, shapes and various weights of paper; then refining the drawings each time. I knew precisely what I wanted to do from the beginning, which was to parody my mother's image of Company Every Sunday, where the dining table on the front porch was filled with guests and food. The structure was to pop open to expose my dear grandmother, Mert, busily preparing food in front of the wood stove—just as my mother drew in her image below. 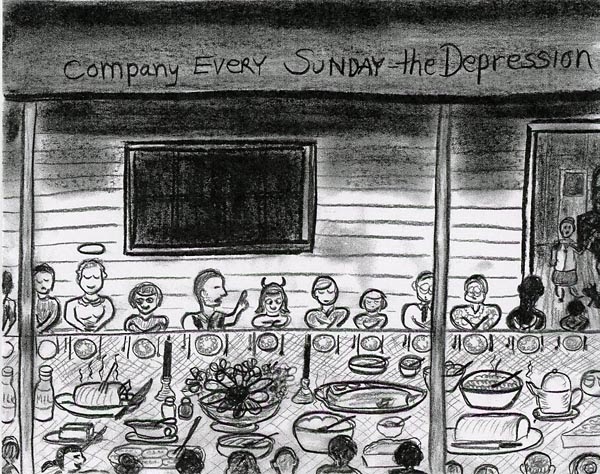 Below are my first attempts at this mechanical structure which were mildly successful. The objective was to have the walls of the front porch open to expose the interior, when the two tabs on either side are simultaneously pulled away. With each successive model came improvements. 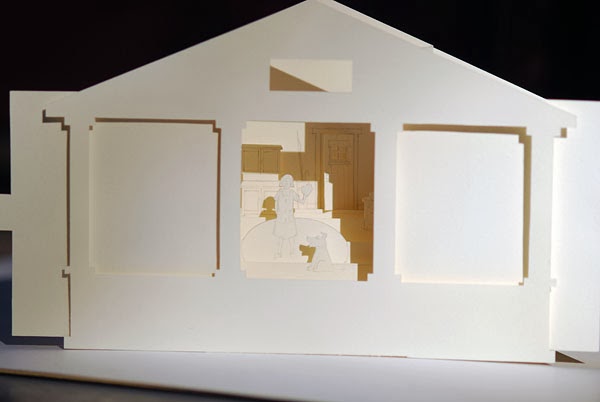 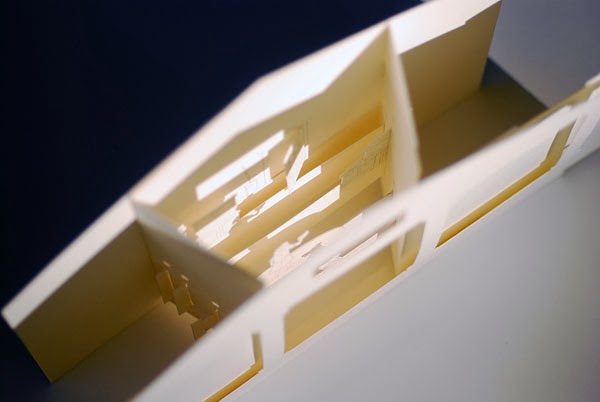 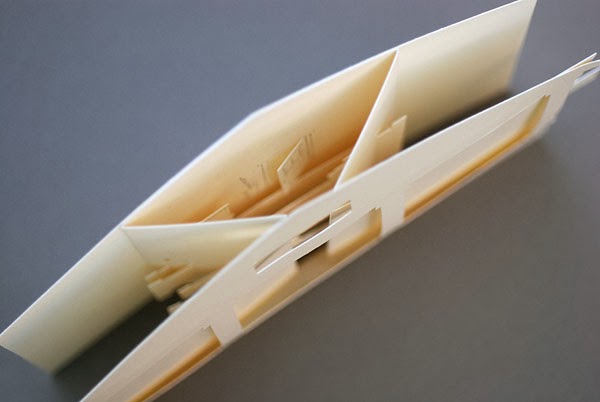 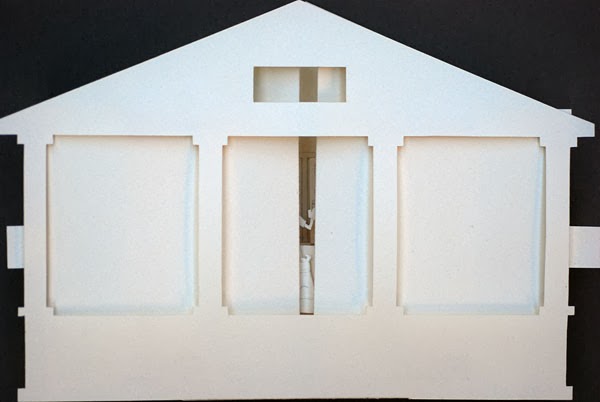 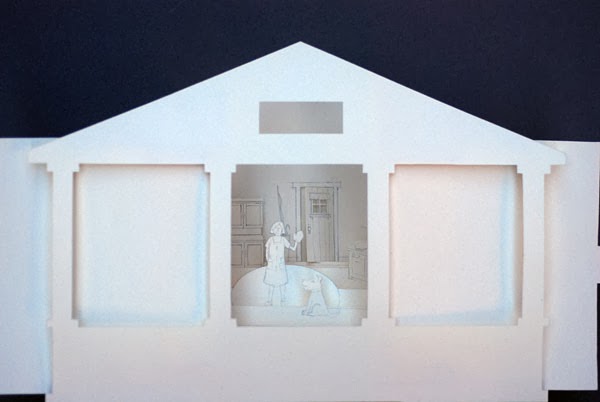 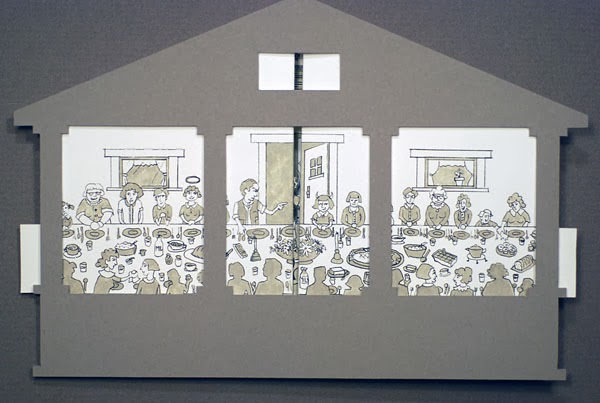 This version is my final outcome. It was my intention to keep the theme of my mother's original—illustrating the scolding she received from her father for clowning around during meal prayers. The table is filled with some of the same foods, although the people are mostly strangers to me—with exception to her sisters and brother, and the haloed young girl on the left panel. She was my mother's cousin, Marion, who later died and had gone to heaven she wrote. I took many liberties on the size and proportions of the porch, and the details of the house, which are much more finished than the original house was at that time. When closed as seen here, it folds flat. The illustration is laser printed and hand-painted. The house is made of 2-ply board and hand-cut papers. It stands freely when opened and is about 7 in. high x 10 in. wide by 4 in. deep. This is an edition of 10. 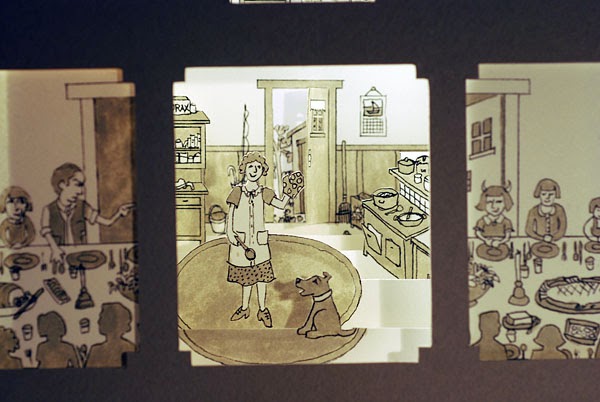 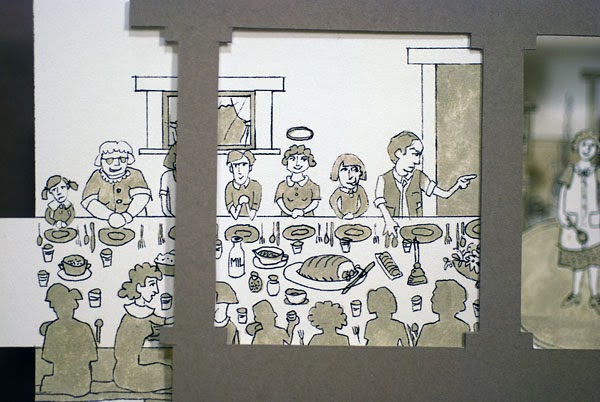 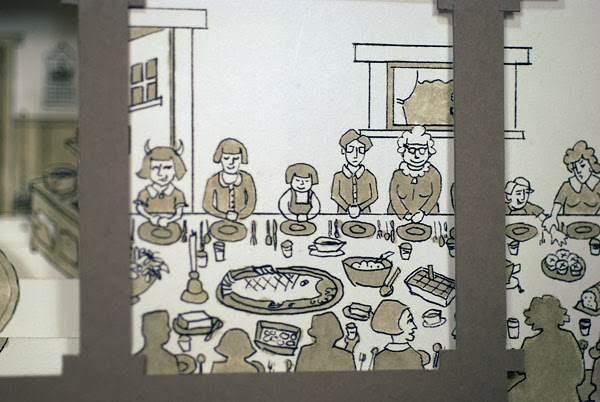 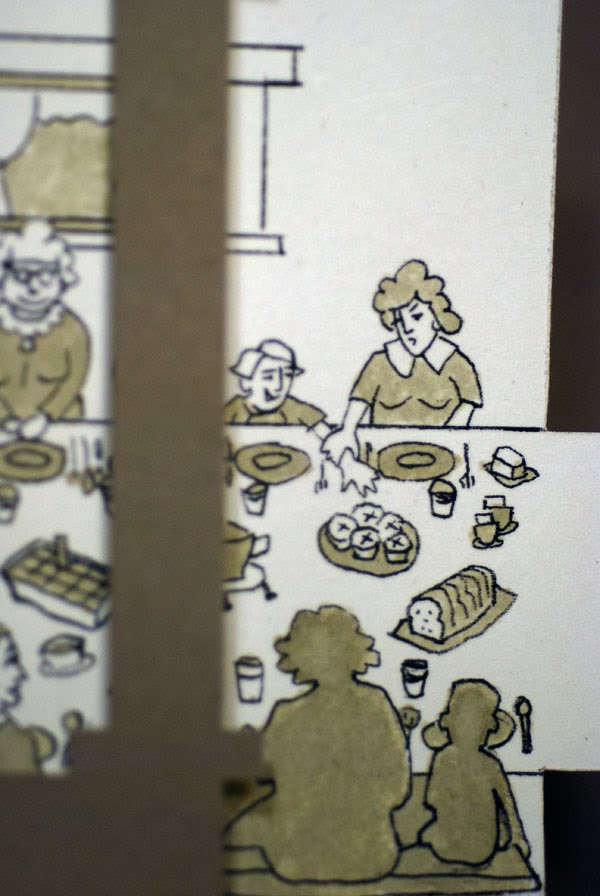 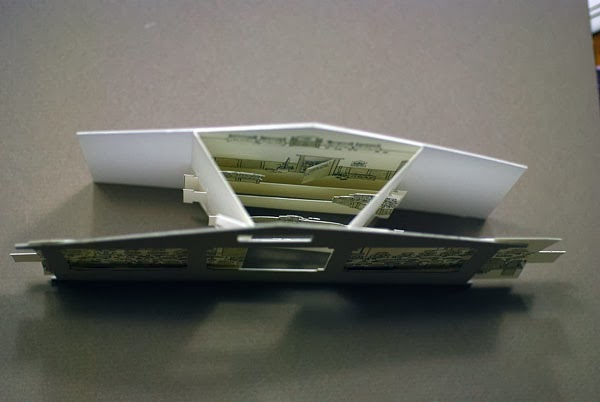 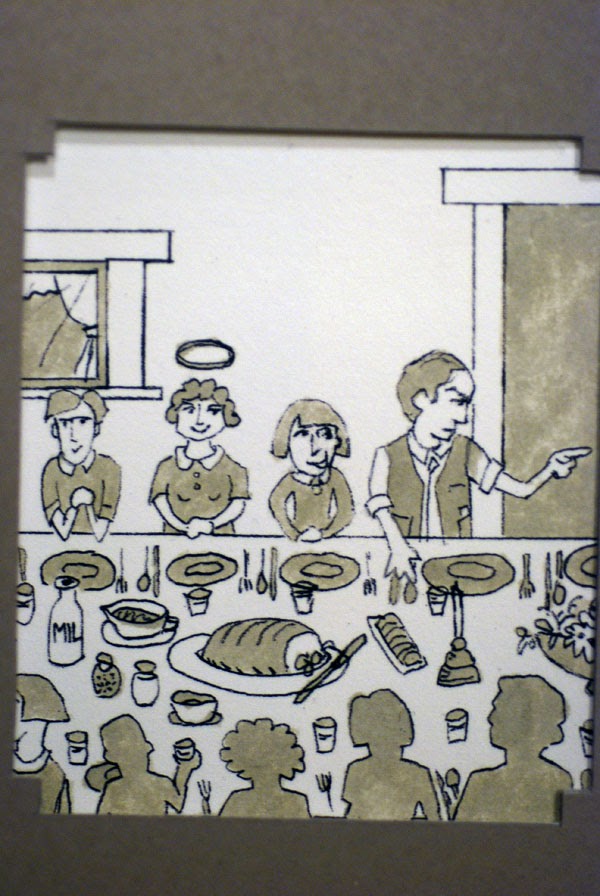 When I completed the final illustration, I noticed the young girl sitting to the left of my grandfather looks strikingly similar to my mother. Seems I made the same mistake she did on some of her drawings where she put herself in the image twice! 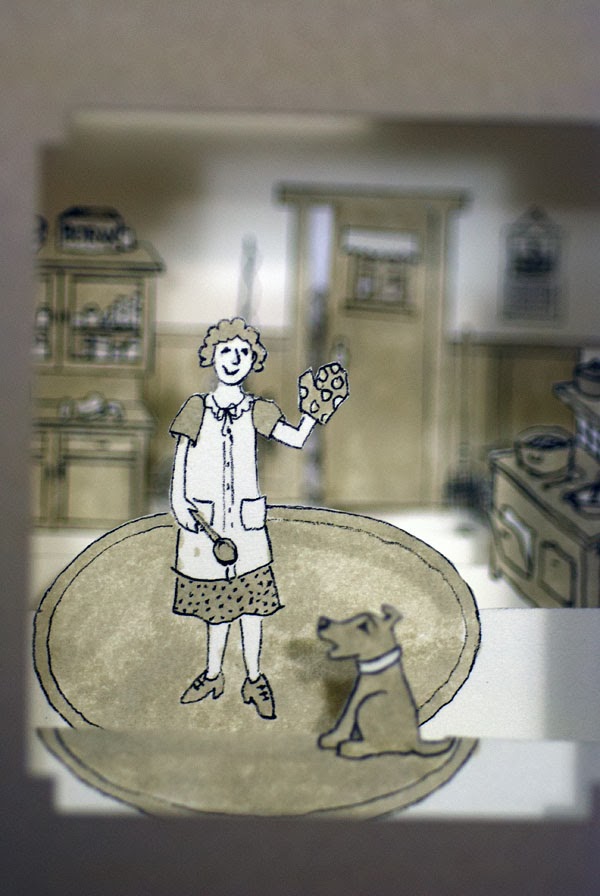 My dear grandmother is seen here wistfully waving, while dog, Spunky waits for handouts. The back door to the Camp house opens to find the outhouse. 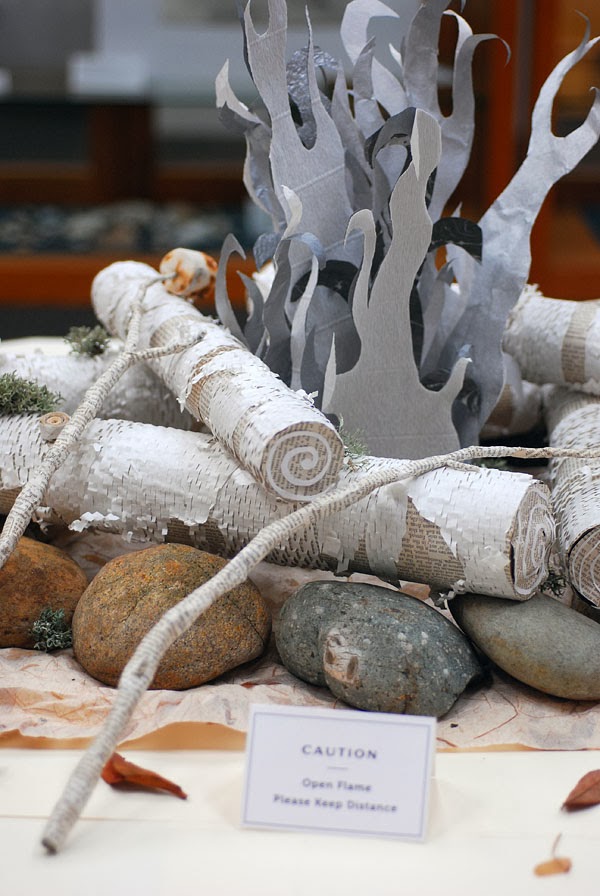 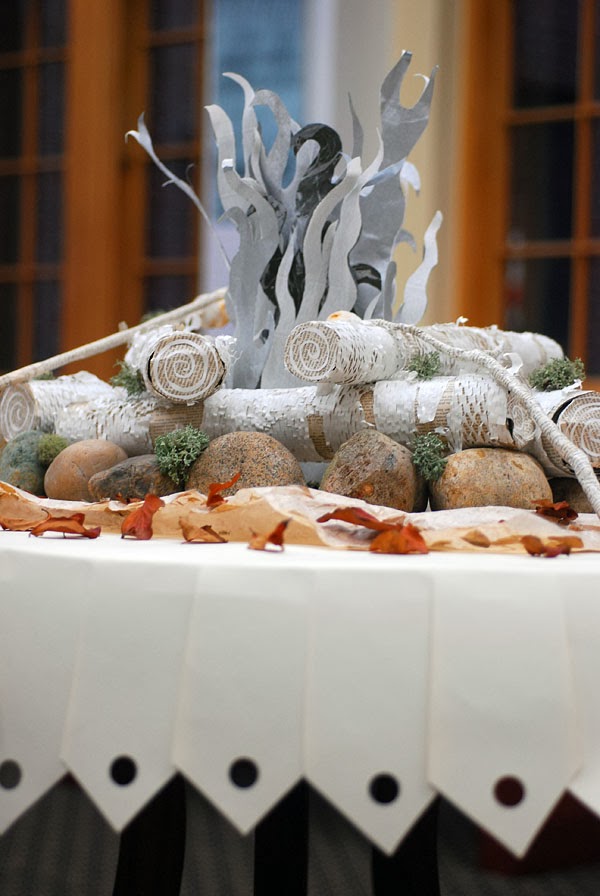 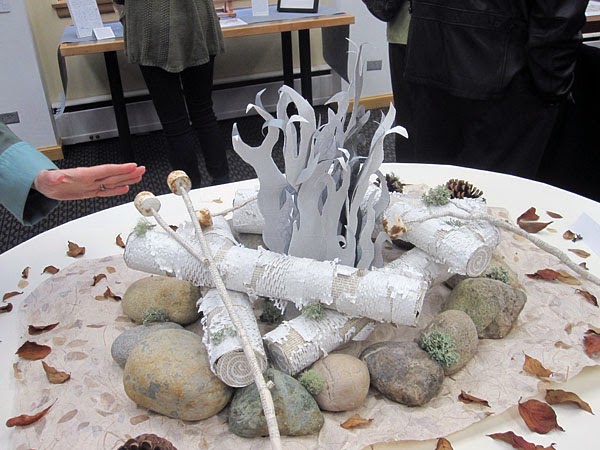 Building a campfire in the center of this library exhibit, seemed like the most appropriate thing to do for a cold November day. The paper marshmallows and stick accoutrements were an added attraction. The roasting is for real, and I took a cue from this earlier Halloween post for the process. The tablecloth was quickly assembled in place from scraps I found in a storeroom. This will be on exhibit at the University of Puget Sound Collins Library in Tacoma, Washington until January 14th. For more information on this exhibit, see my earlier posts here and here.
Posted by Jennifer Kennard at 11/20/2013