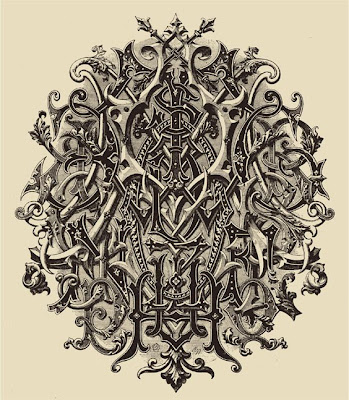 Created in 1877, when type designers had more time to kill, this monogram is composed from the entire alphabet. It was reprinted again in a 1952 catalog of Modern Signs and Show Cards by E.C. Matthews. According to the catalog it claims the original drawing measured 7 3/8 x 9 inches. Ripley once drew up a simplified version of it for use in his "Believe it or Not." I have heard that the inventor of the linotype machine went crazy because of the very intricate work involved. But I don't know what became of this modest artist who simply signed the monogram with the initial D. I would love to see a full color version of this reproduced with each letter a different color. Better yet, just have each letter change color as you roll over.
Posted by Jennifer Kennard at 11/15/2010