Publishers sell stories, yet they are seldom the topics of them. This is not the case of a new British publisher, Visual Editions, nicknamed VE. Visual Editions was born in 2009 out of a joint love for books, when owners Britt Iversen and Anna Gerber wondered why there was such a large divide between text-driven literary books and image-driven art and design books. They now edition beautiful, smart and well-crafted books which are nearly theatrical experiences. They consider this amalgam of text and image as visual writing, and see a rich literary heritage of this kind of writing. Their vision is to make great looking stories—where the words and pictures meld and the act of reading becomes an experience. Here is a glimpse of Tristram Shandy, their first editioned book. 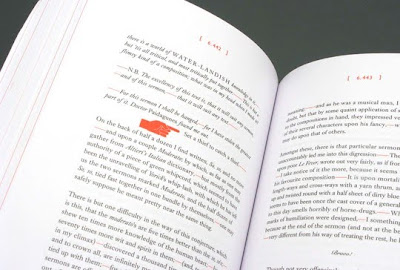 Take a look at a short video of some reactions to VEs second book, Tree of Codes, just released in the UK on November 15th:

In Tree of Codes, author Jonathan Safran Foer uses an existing manuscript and carves out an entirely new story by die-cutting out portions of the text. The original book is one of his favorites—The Street of Crocodiles by Bruno Schulz and Foer claims it is a completely different story with a different arc and characters even. In the process of producing this unconventional book, Visual Editions got turned down by every printer they approached—the stock line being the book you want to make just cannot be made. Their luck turned when the Belgium printer, die Keure rose to the challenge of making a book with a different die-cut on every page. This book, or paper sculpture, defies all literary and design conventions, took over a year of writing, cutting and proto-typing and it was not without production perils. The book's designer is London-based Sara De Bondt Studio. De Bondt is also a teacher at The Royal College of Art who co-curated The Form of the Book conference at St. Bride Library in 2009. The paperback cover of Tree of Codes was designed by Jon Gray of Gray318. A remarkable acheivement all! I cannot wait to hold it in my own hands to experience the reading myself. Note to self...add to wish list. It will be available in the states soon! Listen to what Jonathan Safran Foer has to say about the concept of his new book and the process of reading it:

Tree of Codes by Jonathan Safran Foer from Visual Editions on Vimeo.