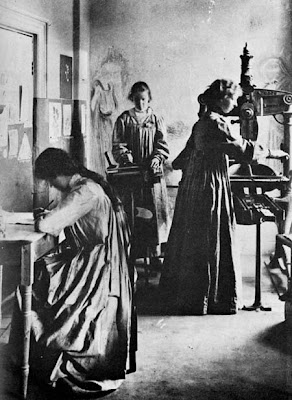 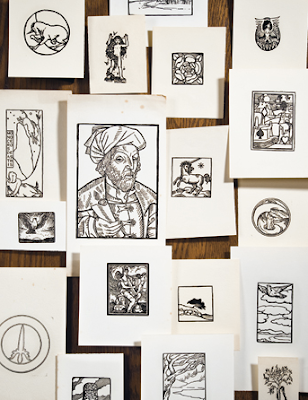 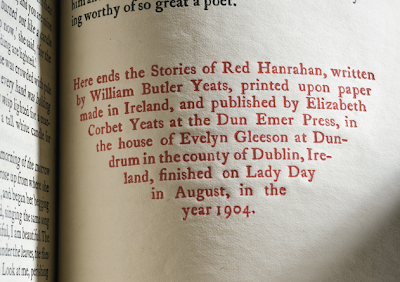 Elizabeth "Lolly" Corbett Yeats (1868-1940) was the first commercial printer in Ireland to work exclusively on iron handpresses. She was also an art teacher and member of William Morris's circle in London and studied with the Women's Printing Society there. In 1902 she established a private press at the large home of Evelyn Gleeson in Dundrum near Dublin and was placed in charge of managing the new Dun Emer Press. With her sister Lily, a skilled needleworker, and Evelyn Gleeson they also began the Dun Emer Guild to train young women in bookbinding, printing and other craft trades so they might earn a living. In 1908, Elizabeth and her poet brother, William Butler Yeats started the Cuala Press, publishing over 70 fine edition books of Irish writers including 48 works by her brother William. After her death in 1940, her sister-in-law Georgina Yeats managed to keep the press running until 1946.
The lovely photo at top from 1903 shows Elizabeth standing at the iron handpress, with Beatrice Cassidy rolling out ink and Esther Ryan correcting proofs at the table at Dun Emer Press. The 2nd image shows a collection of frontispieces and motifs from the Cuala Press, and the last image is a colophon for a 1904 William Yeat's book.