Tonight is the Academy Awards and my pick is for Shaun Tan's The Lost Thing nominated for best animated short. I was unfamiliar with Tan's illustration work until I saw a screening of the Oscar nominated shorts last weekend. There were no designer gowns, no red carpet laid out for us—only an amazingly long trail of spilled popcorn up three flights of stairs, down a long hallway and into the dismal theater—which actually made for a perfectly good intro to this odd little story. 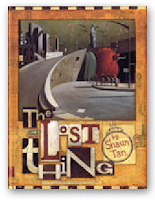 The Lost Thing is based upon Tan's charming children's book by the same name, about a young boy who discovers a giant red creature while he is out searching for bottlecaps on the beach. When he tries to find where the thing belongs in this peculiar little world of industrial drabness, he is met with indifference from everyone he encounters. Work on this 15 minute film took 8 years to complete by a 4-person team in Melbourne Australia, using CGI (computer generated imagery) along with 2D handpainted elements. (That amounts to less than 2 minutes of film per year if you can imagine.) Tan was the writer, director, designer and illustrator on the project. Even with the aid of CGI, almost every surface is essentially handpainted using non-digital materials including acrylic paint, pencil, oil and collage, according to Tan's website. This risk undoubtedly prolonged the entire process, but helped to avoid the artificiality of so many computer animated films. His imaginative characters are delightful and endearing, but it is the scenery and incidental things ongoing at the edges of the frame which give this entire film so much texture. If you look quickly, you will catch glimpses of some nice handlettered typography—graffiti, random numbers, nonsensical industrial signage—oh, and bottlecaps. You just can't go wrong with any story that includes a collection of bottlecaps.
.  .  .  .  .  .  .  .  .  .  .  .  .  .  .  .  .  .  .  .  .  .  .  .  .  .  .  .  .  .  .  .  .  .  .  .  .  .  .  .  .
PostOscarScript:
Yeahhhh, The Lost Thing just won!!!
Oh, and by the way, the 2004 first edition of The Lost Thing is available on Amazon for $263 now. 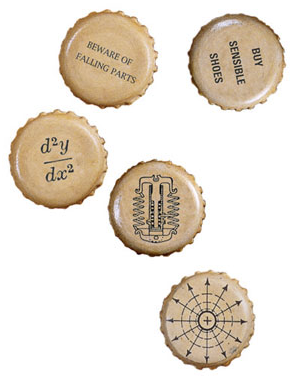