A Prize in Every Bar 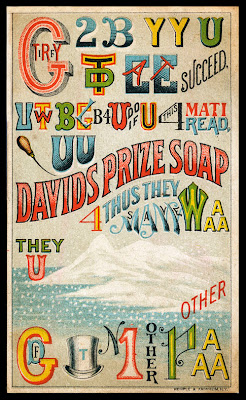 The answer to this rebus is found inside the bar of soap. Sorry, but you are on your own for this puzzler. This early 20th Century trade card from Davids Prize Soap is a nice advertising promotion however. It reminds me of a work by book artist, Angela Lorenz who created a similar conceptual work she calls Soap Story. It is a story about a young Italian washer woman in the 1950s, told within six small bars of soap in an edition of 200 in 1999. The text for the story was silkscreened onto six small pieces of linen cloth and each were concealed in the middle of one of six small bars of soap only to be read entirely after consecutive washings. The reader undertakes a process similar to the protagonist—they must dissolve all six cubes of soap in order to learn how the tale ends for the young washer woman in the story. Spoiler alert: she eventually is able to wash her hands of her economic woes. I encourage you to read Angela's description about this book here which goes into much greater detail. I had an opportunity to hear her speak about many of her books several years ago at a presentation she gave at the University of Washington Special Collections Library. She is a very imaginative artist and conceptual thinker and her site is really worth further exploration. 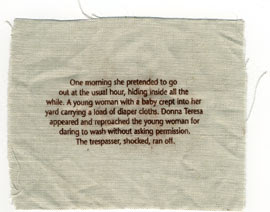