Finding this little ephemeral card about the printing press brings me to a little history lesson about it's origination. It is called a Reward of Merit card, and I believe it could be considered the first historic example of a marketing incentive program. First introduced in the early 18th century as a device to inspire loyalty and discipline, good conduct, punctuality and attendance in Sunday schools, they later became prized tokens of good citizenship for all students. They originated in America and were initially printed one color with a decorative engraving or woodcut with space to write in the student's name and date. During the Victorian era, the printing and design became much more ornate using decorative typography, borders and illustrations and were often printed using chromolithography—usually with some sort of moral text or pious verse in addition to an illustration. According to Maurice Rickard's, indespensible Encyclopedia of Ephermera, some of them took the form of bookmarks, available in collectible sets, and featured letters of the alphabet. The cards were all considered greatly cherished tokens and preserved in scrap albums which helped to popularize the scrapbooking craft at the time and probably kept the little heathens out of trouble. Who knew good citizenship and the Reward of Merit was the archtype of today's brand loyalty and incentive programs?
So I had to laugh when I first saw this Reward of Merit card about the printing press. Was it given to a pressman for having no spelling errors? Maybe they were rewarded for the tightest color registration? It's quite charming and you must click on it to read the entire text celebrating the mighty printing press—a very curious machine. 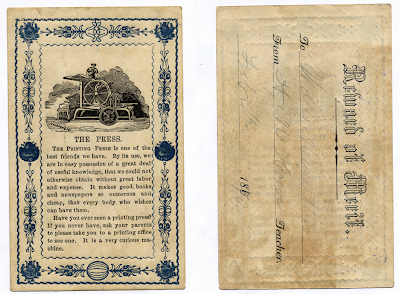