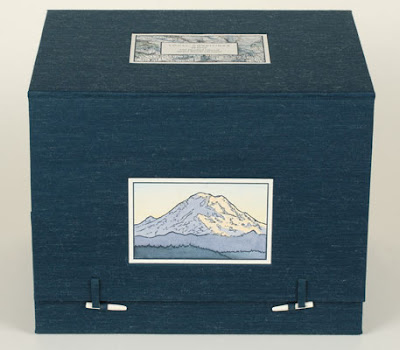 Seeing Mt. Rainier for the first time from any vantage point is an awe-inspiring experience. I've lived in it's shadow for most of my life and I still get chills when I see it come out on a clear day. For full disclosure, I cannot conceal my spiritual connection to the mountain, as we locals so affectionately have christened it. My parents both lived and worked at the mountain in the early 1940s, my husband now works for Mt. Rainier National Park as the debris flow specialist (or fluvial geomorphologist), my father and his best friend made a daring and successful 1st ascent up the SW ridge in 1957 and I've had the misfortune of scattering the ashes of a dear friend into a glacier there. One of the most remarkable events of my own life was a summit climb I did with my husband and a small group of friends on a fairly benevolent September weekend years ago. The mountain is a pretty exceptional sight when it's visible. Some visitors never see it. Many have told stories of traveling long distances to visit Mt. Rainier, only to stand on its' flanks in the midst of a complete white-out without even a glimpse. It is an enigma—formidable, imposing and constantly changing, but when seen on a clear day, it is a magnificent sight from any direction.
Artist Chandler O'Leary first set eyes upon Mt. Rainier about 4 years ago on her first visit to Seattle when she spotted the view from the University of Washington campus. After a relocation to the Northwest a short time later, the seeds of an artist book took shape which later evolved into a two year project funded by an artist's grant and filled with historic research, 100s of miles of photo-scouting adventures, preliminary drawings and 1000s of print impressions at a print studio owned by her good friend Jessica Spring of Springtide Press in Tacoma, Washington. Chandler took inspiration for her final work Local Conditions, from Japanese artist Katsushika Hokusai (1759-1849) who produced two series of woodblock prints depicting scenes of life at the foot of Mt. Fuji in the mid-19th century. Like Hokusai, she wanted to illustrate the many views, and she chose to produce a series of 120 image flats—both foregrounds and backdrops of the mountain—which can be interchanged at will by the viewer to create a nearly endless variety of different views. These image flats as she calls them, are contained inside drawers within a custom 10 inch square viewing box. The 4 sides of the box each have corresponding illustrations of the north, south, east and west faces of the mountain, depicting each at the same time of day: sunset. The title plate at the top is nicely arranged with a topographic map image of the summit. 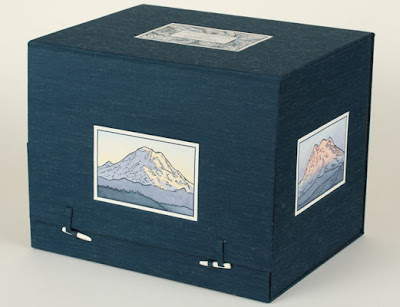 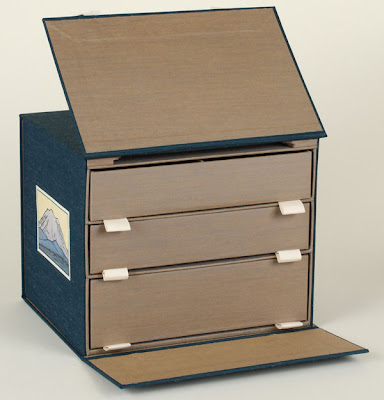 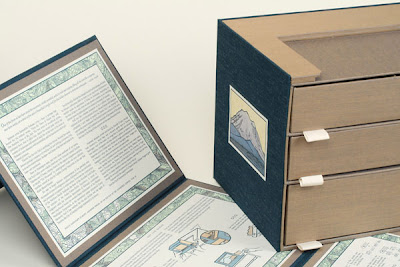 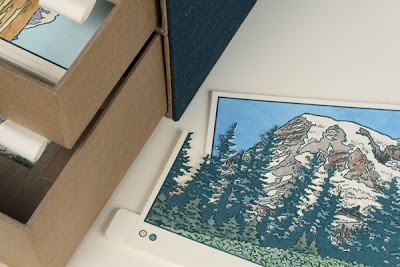 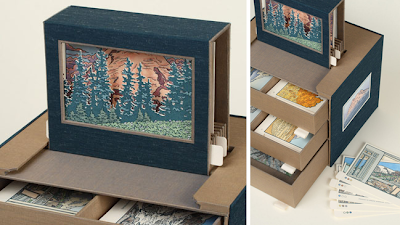 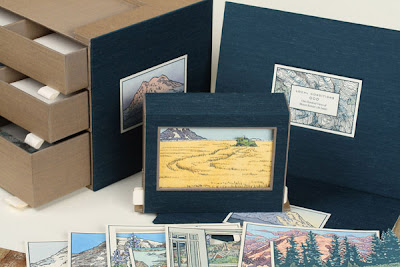 The box opens to reveal a cloth-bound wrapper with attached colophon explaining the book's concept, production and instructions for display. Inside the nest of drawers are the image flats and a 3x5 inch viewing window to stage your interactive display on top of the box. Each of the 120 different image flats are letterpress printed in Hokusai's indigo blue ink and hand-finished with watercolors. The edition size is 26. The price is $2600. You can find a great deal more information about Local Conditions and see additional work from Chandler O'Leary's at Anagram Press.
Below is a view of the mountain at 10,000 feet from a plane. And another with a cow standing on the wing. It's Local Conditions with a chance of mirage. 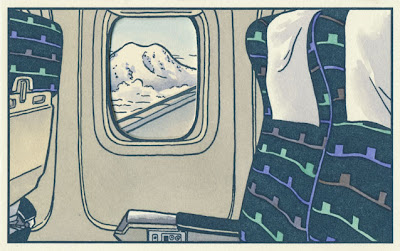 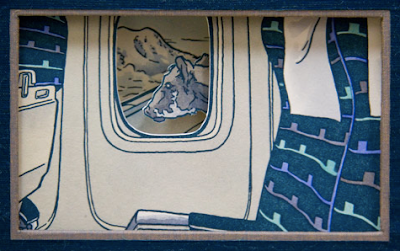 Below is a composite of two image flats which is the view Chandler first saw of Mt. Rainier on the UW campus and a historic photo taken at the same place during the Alaska-Yukon-Pacific Exposition in 1909. 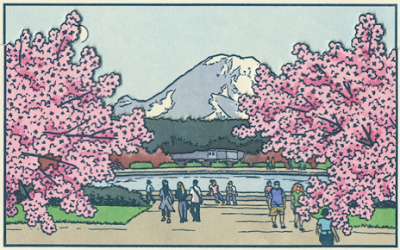 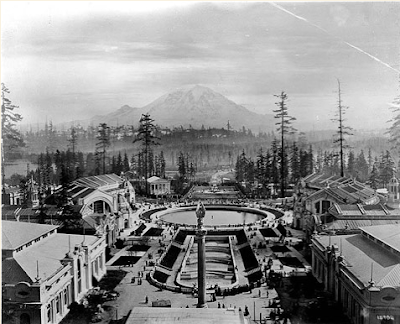 Below is a 1905 postcard view of the Northwest face of the mountain taken from Tacoma, and Chandler's composite of the same aspect which includes 3 image flats. This view is also available as an individual print on Etsy. 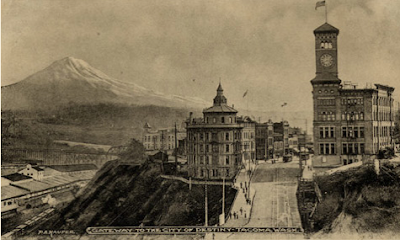 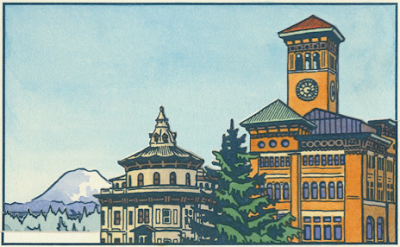