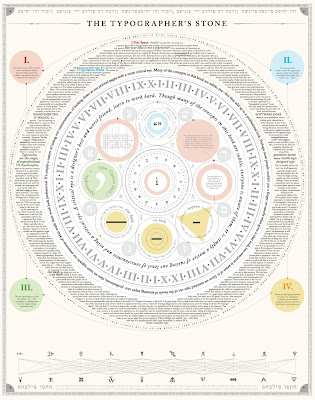 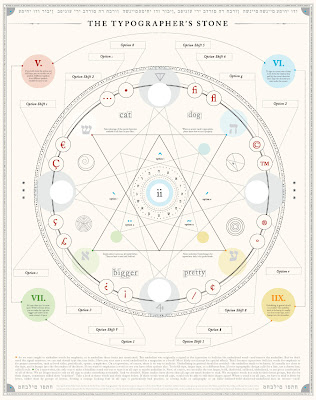 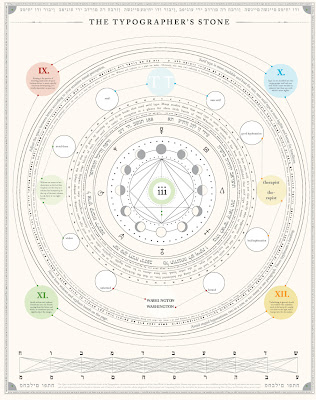 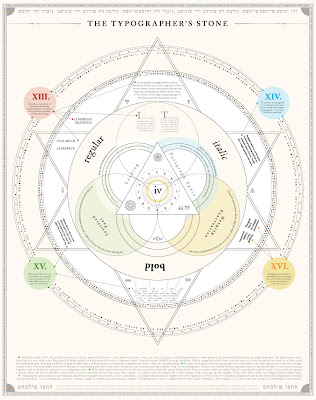 It's no surprise that my student Joe of The Viatorium Press, discovered the brilliant work of Kristen Haff. He is a big fan of alchemic texts and typography and does his research. I am grateful for the introduction.

Kristen is a recent design graduate from the San Francisco Academy of Art and acquired her first job as a Junior Designer for Viking and Penguin imprints with the Penguin Group in New York City. Included in her portfolio of work is a series of four typography posters titled The Typographer's Stone which she produced several years ago as a school project. The assignment was to reinterpret the text from Robin Williams book, The Mac is Not a Typewriter and visually translate them into spreads. Kristen imagined Williams' text as a series of golden rules for any designer and was granted special permission to produce them as a set of posters for her assignment. Her teacher then suggested she treat them like sacred texts and to consider using different languages in order to give them a more cryptic feel. This inspired her approach of styling them after old alchemy diagrams which often contained vast amounts of information within elaborate structures. (The printers and designers of these old charts and diagrams were the original visual information designers). It is difficult for me to read and authenticate her presentation of the four different diagrams, however they are very beautiful visual displays of typographic hierarchy nonetheless. This is a very difficult and challenging exercise to distill such a vast topic as rules of typographic ettiquette into categories and hierarchies of information and I think Kristen did an amazing performance with visually displaying it all. If she were to revisit them again someday, she tells me she would like to give them each an aged, worn feel. I do hope she considers publishing them as posters or even a fold-out compendium of some kind as I suspect there would be a great deal of interest among information designers and typographers. Kristen has a very bright future ahead of her now in the publishing world and I look forward to seeing more of her book design work in the future. Below is a glimpse of her portfolio of student work. 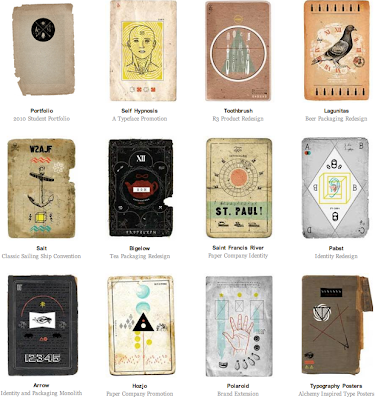